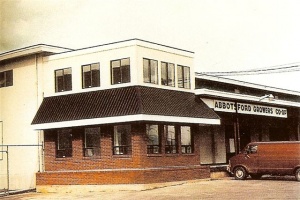 Abbotsford Growers Co-operative Union has been the leading processor and packer of small fruits, primarily raspberries, in the Fraser Valley of British Columbia, Canada, since 1947. It has played a significant role in the economic life of a number of Mennonite farmers throughout the Fraser Valley, especially in the early years of Mennonite settlement in the Abbotsford area, and is an example of the strength of the co-operative movement amongst Mennonite settlements in western Canada.

The organizational meeting of the Beeren Gesellschaft (Berry Co-operative) was held on 1 December 1947. The purpose of the meeting was to form a local Berry Co-op "so that we could receive and wash our own berries." Three months later on 4 March 1948 Abbotsford Growers Co-operative Union was incorporated. Elected to the first board of directors were: Jacob Janzen, President; Abram J. Dyck, Vice President; J. H. Lepp, Secretary; Johann Friesen, Member at large; and D. E. Friesen, Member at large. The list of 90 charter members included exclusively Mennonite individuals from the surrounding area including Abbotsford, Aldergrove, Clayburn, Matsqui, and Mt. Lehman.

In November 1992 at a board retreat meeting at the Hazelmere Golf and Country Club chaired by Sam Schartner, a Mission Statement was prepared. It read: "To exceed member and customer expectations in quality of service and quality of product."

Three different buildings have served the organization over the six decades of its existence. The first building was a 12.2  x 18.3 meter structure erected in East Abbotsford in 1948. It was completed in time for the 1948 crop. A larger building 14.6 x 29.3 meters was built on Commercial Street in Clearbrook in time for the 1959 crop but this building became too small as well, and in fall 1967 the present plant at 31825 Marshall Road, Abbotsford was built. This 30.5 x 30.5 meter plant with dock additions as well as new office space has served Abbotsford Growers for the last 42 years.

Mennonites of the Fraser Valley were the pioneers of this berry enterprise. Eventually, non-Mennonites also joined the co-operative. A steady influx of Indo-Canadians into the Fraser Valley resulted in the gradual change in farmland ownership beginning in 1974 when the 40 acre raspberry farm of H. H. Falk on Huntingdon Road was purchased by K. S. (Cher) Braich. Other farm sales to Indo-Canadians soon followed, and today the bulk of the raspberry crop is grown on Indo-Canadian farms.

The farm labor force during the harvest season of the early years consisted mainly of Mennonite family units. This began changing when land ownership shifted. By the turn of the century most of the farm labor force consisted of Indo-Canadian family units as well as contract pickers, again mostly Indo-Canadians. In recent years Mexican farm workers have come as far north as the Fraser Valley and they have been working alongside Canadians as farm laborers. It must also be noted that much of the harvesting of the raspberry crop is now done by machine.

In 1952 the need for a sales manager became apparent and Jake Klassen was hired to serve in this capacity. In 1972 Jake Martens took on the marketing responsibility. He has served in this capacity for well over 30 years. General managers have included Doug Edgar and Stephen Evans.