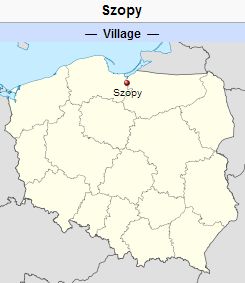 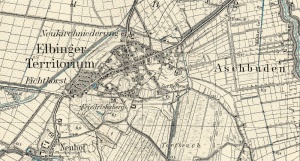 Aschbuden originally belonged to the Teutonic Knights. In the 1580s the Elbing town council divided the area by Lake Drużno into eight single-włóka (18 hectare) plots. In 1586, Karczowiska Górne (Oberkerbswalde) was founded on six lots, while Aschbuden with the remaining 2 włókas (36 hectares) was settled by Dutch colonists.

Until 1772 Aschbuden was located in what was known as Royal Prussia (also known as Polish Prussia) in the Kingdom of Poland. The First Partition of Poland in 1772 resulted in the creation of a new province in 1773, called West Prussia, in which the village was located. Aschbuden was situated in the district (Kreis) of Elbing until the end of World War I, when it came under the jurisdiction of the German province of East Prussia. At the outbreak of World War II in 1939, Aschbuden came under the control of Nazi Germany. In February 1945 it was occupied by Soviet forces and eventually returned to Poland. In 2012 Aschbuden (now Szopy) was a village in the administrative district of Gmina Gronowo Elbląskie, within Elbląg County, Warmian-Masurian Voivodeship.

The Prussian census of 1776 lists three Mennonite families in Aschbuden with the following surnames: Goertz, Martens, and Unger. In 1820 Aschbuden had 159 inhabitants, of which 30 were Mennonite.

Mennonite who were residents of Aschbuden were members of the Elbing-Ellerwald Mennonite Church.