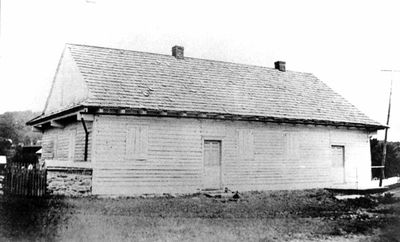 The Hereford (Bally) Mennonite Meetinghouse in use 1790-1899.
Photo courtesy of the Mennonite Heritage Center, Harleysville, Pa. 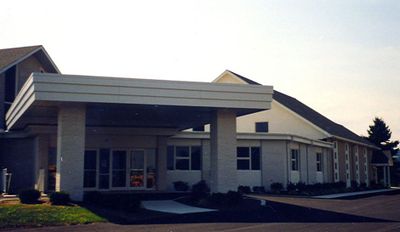 The Bally Mennonite Church has had a continuous presence in eastern Berks County, Pennsylvania, for almost 300 years. Originally a part of Hereford Township, the church was formerly known as the Hereford congregation. The first Mennonite settlers arrived in the area around 1720, with a meetinghouse being erected in 1732.

A larger meetinghouse was erected in 1755 and enlarged in 1790. This log structure was used continuously until 1899, when it was replaced by a plastered stone structure, which still stands (2010) and is currently used as a church-sponsored community recreational center in Bally. A new meetinghouse was constructed in 1971 and is located along Route 100 at the southern edge of Bally. A large fellowship hall was added in 2001. Sunday morning attendance has varied from 100-150 over the past several decades.

The Bally congregation is a member of Mennonite Church USA and Franconia Mennonite Conference. There are two Mennonite churches in the small town of Bally as a result of the Oberholtzer schism of 1847. The other congregation, which retains the designation “Hereford Mennonite,” has close ties to the Bally Mennonite Church.

The peaceful town of Bally began as a settlement of mostly Mennonites and Roman Catholics. There are local accounts of cooperation between neighbors and church from these two branches of faith. This goodwill continues as persons of other faith traditions move into the expanding community.

The Bally congregation has sought engagement with the local community. Active programs have included the Bally Community Center, which has operated since the early 1970s, a pre-school program which has met daily in the church basement, a community garden next to the meetinghouse, and periodic pancake breakfasts which have drawn many participants from the surrounding community.

The Anabaptist emphases of discipleship, community, together with peace and justice, are a vital part of the Bally Mennonite Church agenda.

Bally Mennonite Church (Mennonite Church USA; earlier known as Hereford Mennonite Church), located in the village of Bally, Washington Township, Berks County, Pennsylvania, is a member of the Franconia Conference. The first meetinghouse is supposed to have been built here in 1732, replaced by a larger log structure in 1755, enlarged in 1790, and used continuously until 1899 when it was razed, and succeeded by a stone structure plastered both inside and out. As in many other congregations of the Franconia Conference, English was first introduced about 1900. The Bally (Hereford) congregation was never large, seldom being much over 100 even including those who worshiped in the Boyertown meetinghouse. (The Bally and Boyertown worshipers constituted but one organized congregation historically, and were served by one set of Sunday-school officers.) Members worshiping at Bally in 1956 numbered 95, while 33 worshiped at Boyertown. Elias W. Kulp was the pastor in 1956, assisted by Paul Longacre; the deacon was Abram M. Ehst.

In the division of 1847 one of the Hereford ministers withdrew from the Franconia Conference and took a portion of the members with him into Oberholtzer's new conference. In 1851 this Hereford General Conference Mennonite congregation ceased to use the old meetinghouse on alternate Sundays as they had done since 1847, having built a new meeting house. It became much larger than the old group, reaching 202 members by 1895.