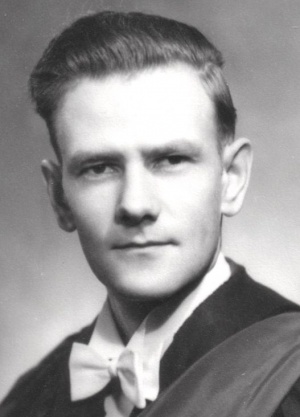 Bernard’s great-grandparents were Mennonite pioneers who came to south-eastern Manitoba in 1874. Although he was born in Texas, Bernard was raised in Clearsprings, Manitoba.

In 1945, Bernard Barkman graduated from the School of Medicine at the University of Manitoba. At that time he received an invitation from the Bethesda Mennonite Health Society, which was looking for a German speaking doctor to serve the growing Mennonite community at Abbotsford, BC. In December of that year Bernard married Eva Toews. Eva had graduated as an Registered Nurse from St. Boniface Hospital in Winnipeg. Bernard and Eva moved to Abbotsford in 1946.

His prairie farming background and early life experiences shaped who Bernard was as a person and influenced the unique way in which he practiced medicine. He was an avid student and kept up with the latest developments in medicine, but his personal style was that of an earlier time when doctors made house calls and were more involved in the lives of their patients. Bernard was in a solo practice, never had a secretary, and answered all of his own calls. When asked about this, he claimed no one would want to work the hours he worked, but in fact he enjoyed the independence of working alone. Bernard cherished his family and in spite of his busy schedule, found creative ways to spend time with them.

Bernard loved people. His patients were his friends. Bernard was always curious about their personal stories and circumstances. He had a great memory for details and people were often surprised when he would bring up things they had discussed sometimes years earlier.

Many people over the years have told stories of how Dr. Barkman prayed for them or directed them to God in the midst of their troubles. He was outspoken about his faith. Bernard had a very generous spirit and stories of his kindness and generosity abound. Before socialized medicine, he would cancel the bills of pastors, widows, missionaries, and anyone who was unable to pay. He often gave food and assistance to people in need and supported many mission causes.

Eva Barkman supported her husband faithfully behind the scenes, often giving nursing advice if he was unable to be reached. She made Bernard’s medical life possible by providing a stable loving home base and working around his busy and often unpredictable schedule.

Bernard Barkman appreciated nature and often commented on the amazing beauty of the Fraser Valley, from the surrounding mountains to roadside wild flowers. He was especially fond of roses and planted a large climbing rose bush at his office door.

Dr. Bernard G. Barkman served his community faithfully for forty-four years. During that time he delivered over 1,500 babies. His legacy lives on in the lives he touched as he ministered to the physical, emotional, and spiritual needs of his many patients.