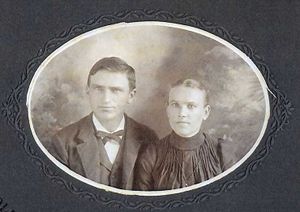 Henry Cornelius Bartel and Nellie Schmidt Bartel were founders of two Mennonite missions in China. Henry Bartel (1873-1965) was born in Gombin, Poland (under Russian rule), and immigrated with his parents to Hillsboro, Kansas at age three. He was converted at eighteen and joined the Gnadenau Krimmer Mennonite Brethren Church. In 1899 he answered the call to serve Christ by going to work at the Light and Hope Orphanage, Berne, Indiana. Nellie Schmidt (1876-1946) was born in Avon, South Dakota, shortly after her parents arrived from Russia, the third of 15 children. She was converted and baptized in the Evangelical Mennonite Brethren Church at the age of 16. In 1898 she went to serve at the Light and Hope Orphanage. The Bartels were married 4 November 1900.

In 1901 Henry and Nellie Bartel went to China as missionaries with Horace Houlding of the South Chihli Mission. In 1905 they founded the first Mennonite mission in China, later known as the China Mennonite Mission Society. This was an independent faith mission organization with a board made up of a few friends and supporters. It drew both its missionaries and its support from members of the Krimmer Mennonite Brethren, Mennonite Brethren, Evangelical Mennonite Brethren, and Missionary Church Association. The mission was located in Shandong (Shantung) and Henan (Honan) provinces with its center in Caoxian, Shandong.

In 1941 the Bartels began work in West China along the Sichuan-Gansu-Shaanxi border; this became the West China field of the Mennonite Brethren Church in 1945. Nellie Bartel died in Shaanxi Province in 1946; Henry Bartel continued to work in China until 1952. He died in Hillsboro, Kansas. The Bartels also assisted Henry and Maria Miller Brown in the beginnings of the General Conference Mennonite Mission in an area adjacent to that of the China Mennonite Mission Society. They also assisted Frank V. and Agnes Ebel Wiebe in founding the Krimmer Mennonite Brethren mission in Inner Mongolia (1923).

The Bartels were parents of Loyal, Paul, Agnes (Wieneke), Elsie (Eisenbraun) and Jonathan; all but Jonathan served as missionaries in China. Paul was a long term missionary in Hong Kong and Jonathan in Japan. Loyal remained in China until his death in 1971.

Epp, Margaret. This Mountain Is Mine. Chicago: Moody Press, 1969.