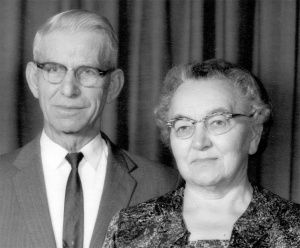 Alexander received a Christian upbringing and at the age of 14 he accepted Christ, was baptized, and joined the Mennonite Brethren (MB) Church in his community. He studied at the Zentralschule and Kommerzschule in Halbstadt, Ukraine, and then obtained a position as a teacher in Marienfeld.

In 1913 Bauman emigrated to Canada and settled in Altona, Manitoba. He attended the Mennonite high school there, and upon graduation taught in a number of schools in Manitoba and Saskatchewan. After his marriage to Elizabeth, the couple purchased a farm in Dalmeny. It was hard to make a living during the depression years, so they moved to British Columbia in 1932. They lived for a short while in Yarrow and Agassiz, before settling on a 20-acre bush lot in Abbotsford, BC in 1938.

Alex and Elizabeth were among the pioneers of Abbotsford. They spent 20 years clearing their land, building the farm buildings, and doing mixed farming. They were also very active in the South Abbotsford Mennonite Brethren (MB) Church and in the Abbotsford community. Alex was on the church board, taught Sunday School and served as youth leader. He loved music, and formed an orchestra which played in the South Abbotsford MB Church on Sunday evenings, and also in the Menno and Tabor Homes for the aged. He offered private music lessons to many young people.

Alex Bauman was instrumental in forming a cooperative called the Farmer’s Land Clearing Association. This coop purchased a bulldozer and hired a driver to clear off the stumps from the pioneer farms. This was a great help to the early farmers who had only horses to till their land.

Alex Bauman spoke three languages fluently, was an avid reader, and placed a high value on Christian education. He was instrumental in establishing the Bible school in the South Abbotsford MB church in the early 1940’s. This school has flourished over the years and is now Columbia Bible College. Alex Bauman was also instrumental in establishing the Mennonite Educational Institute (MEI). In 1944 he traveled to Victoria to seek the permission of the Deputy Minister of Education for the establishment of the MEI. He served on the board of both institutions for many years.