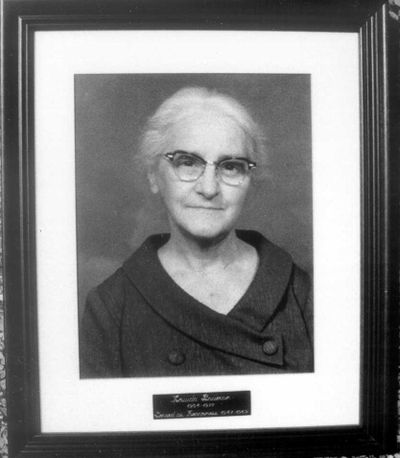 Louida Bauman, in the photo in which she is identified as a deaconess.
Source: Mennonite Archives of Ontario 1989-1-112

Louida Bauman was born 29 November 1904 on the family farm north of Floradale to Silas Bauman (27 August 1861-21 January 1913) and Lydia Ann Groff Bauman (27 November 1862-8 May 1949). She was the 11th in a family of nine boys and four girls. Having chosen to remain with the Mennonite Conference of Ontario at the time of the division of 1889 that saw the formation of the Old Order Mennonites in Ontario, her parents became charter members of the Floradale Mennonite Church where Silas was ordained a deacon in 1896. Silas' early death from cancer in 1913 (as well as the deaths in 1907 and 1908 of the two oldest sons) left the family in poverty. In 1925, Louida, her mother and several siblings moved to Kitchener and became active at First Mennonite Church. Louida died at K-W (Grand River) Hospital on 3 August 1977. She is buried in the cemetery at First Mennonite Church.

Louida's widowed mother, Lydia, stayed on the farm with her younger children for eight years after her husband died. She lived frugally and taught her children to do the same, a habit that continued even when life became easier in Kitchener and for Louida when she began studies at Toronto Bible College (now Tyndale University College and Seminary). Like other young Mennonite students, Louida helped at the Toronto Mennonite Mission to get practical experience. Then in 1931, she was hired as a worker at the mission. Louida lived in the mission home with Harold and Cora Groh, their five children and Mary Reesor, another single worker. Besides assisting with domestic chores and attending to numerous house guests, she participated in all the mission activities, distributed evangelical literature, visited the sick and neighborhood homes and taught Sunday school and Summer Bible School. She was very good with children. Elizabeth (Groh) Rudy remembers Louida singing and telling stories to ease the Groh children's anxiety when black-outs and sirens made sleep difficult during the war years.

While living in Toronto, Louida often visited her home congregation and kept in touch with the Dorcas (Sewing) Circle, an evening group for single and working women. Those women supplied the mandatory white, net “coverings” for her. In 1932 she was guest speaker at the annual Ontario District Sewing Circle meeting. Later, back in Kitchener, Louida served as secretary for the Ontario organization from 1947-1953 as well as secretary of literature and frequent devotional speaker for the Dorcas Circle.

Her mother's failing health ended Louida's Toronto Mission service. She returned to Kitchener in 1947 to manage the home for her mother and four unmarried siblings. In July the First Mennonite Church board called her “to do personal work [visitation] and in general assist the Pastor.” Bishop C.F. Derstine, the pastor, called her “deaconess” but she was never ordained nor did she seek a title. Sometimes church members like Grace Weber provided rides since Louida had no car but she often used public transit for her strict visitation schedule. She also wrote letters and created hand crafted cards when visits weren't possible.

After her mother's death in 1949, Louida had more time for her visitation ministry, often doing household chores like bringing in laundry from the outdoor line during her visits. She taught Sunday school, Summer Bible School and was given the job of “matron” for the winter three-month Ontario Mennonite Bible School and later the five-month Ontario Mennonite Bible Institute located at First Mennonite. She arranged accommodation in private homes for the many students from across Canada and the United States and was responsible for their welfare as well as scheduling tasks at the school for all students.

Louida's declining health led to her retirement in 1969. She lived with illness for her remaining years until her death in 1977. She is remembered for her conscientious and selfless service both in Toronto and Kitchener. Her portrait with the title “Deaconess” was hung in the foyer of First Mennonite Church along with those of former ordained male leaders.