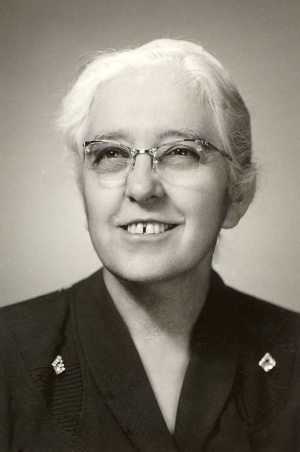 Silas and Lydia Ann became charter members of the Floradale Mennonite Church, and Silas was ordained as a deacon in 1896. Both Silas and Lydia Ann were regular contributors of articles to the Herald of Truth and the Gospel Herald. The early death of Salome's father from cancer in 1913 (as well as the deaths in 1907 and 1908 of the two oldest sons) meant the family was poor.

Despite her difficult early years, the family encouraged Salome to further her education, and she boarded for a time in Elmira in order to attend "Middle School." After Lydia Ann moved to Kitchener with the youngest children in the mid-1920s, Salome finished her high school at Kitchener Collegiate Institute, and graduated with the highest marks in Waterloo County. After a year of normal school she taught first grade in the public school system for 12 years.

In 1945 the Mennonite Conference of Ontario launched Rockway Mennonite School in Kitchener as more Pennsylvania-German background Mennonite students pursued a high school education. Conference leaders had concerns about the cadet program, and aspects of the physical education program and science classes in the public system. Harold Groh, superintendent of the Toronto Mission, obtained a high school teaching certificate in 1945, the first Mennonite within that conference to do so, and was chosen at the first principal for the new school. Groh knew Salome Bauman's sister, Louida, as she had worked at the Toronto Mission for some years. Salome, as an experienced teacher, was invited to become the second teacher at the new school. She consented, taking a 40 per cent reduction in salary.

Salome Bauman taught English, French and Latin at Rockway for 25 years, and for two of those years (1960-1962) served as the principal of the growing institution. She completed her B.A. in 1951, and for a number of summers spent time in Quebec in order to improve her oral French language skills. She moved around the classroom when she taught, and constantly challenged students to do their best work. Occasionally a sharp verbal edge, reflecting the intensity with which she engaged her vocation, would catch students off guard. Salome demonstrated care for her students and would readily lead the class in prayer in times of difficulty, for example for a fellow student's health crisis. She was a dedicated, inspiring teacher who had little difficulty maintaining discipline in her classes. The school's historian described Salome Bauman as the "soul of Rockway Mennonite School in its first two decades."

The later 1960s were less fulfilling for her, as Rockway Mennonite School faced financial difficulties and introduced a less traditional approach to pedagogy. When the Mennonite Conference of Ontario in 1970 held a plebiscite in its churches on whether to close or continue the school, Salome Bauman voted to close the school, though a strong majority of 74 per cent voted for continuation.

Notwithstanding the disappointments of the later years, Salome Bauman helped to shape a generation of Ontario Mennonite students. She also participated actively at First Mennonite Church, teaching Sunday school man;y years, sometimes directing the Vacation Bible School and serving on church council in the 1960s. She wrote a short history of the congregation for its sesquicentennial.

Salome Bauman died 16 April 1986 at Fairview Mennonite Home; she is buried in the cemetery at First Mennonite Church. Her dedication and work ethic provided a strong role model for her students and all those she encountered. Her life as a single woman who fully utilized her leadership skills commanded and received respect.