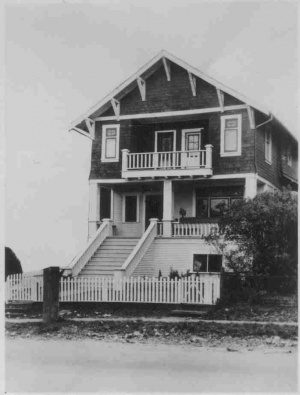 The Bethel Girls' Home located in Vancouver, British Columbia was founded in 1931 by young Mennonite women who came to the city to work in domestic service. By June 1931, the Conference of the Mennonite Brethren Churches assumed control, although rent and other expenses were paid by the women using the home. The need for such a home was felt particularly by Mennonite families who needed to pay the travel debt to the Canadian Pacific Railway for their journey from Russia in the 1920s. Large numbers of young Mennonite women traveled from parts of British Columbia, Alberta. Saskatchewan and Manitoba into the city in search of employment. In 1937 the home at 6363 Windsor Street was purchased along with the adjacent lot with funds raised primarily by the women along with some church assistance, and the home was placed under the jurisdiction of the City Missions Committee. Due to the size and age of the house, the property on Windsor Street was sold and a house at 545 East 49th Avenue was purchased in 1943.

At first about 50 girls visited the home regularly. The numbers increased during a new wave of immigration in the later 1940s. During the home’s peak in 1956, minutes of meetings record that 350 young Mennonite women were matched with 1,700 employers. Matrons provided the girls with physical support, spiritual care and moral guidance. On Thursdays, when the girls had a half-day off, they gathered in the home, shared bag lunches and tea, exchanged their experiences, and received additional religious instruction from ministers of the City Missions Committee of the Mennonite Brethren Conference.

The Bethel Girls' Home of Vancouver met a great need for the young Mennonite domestic workers for 30 years. In 1961, the Conference closed the home, and it became a university student residence.