The headdress of Christian women has at times been prescribed in a particular form for religious purposes, especially by Catholic religious orders, but also by Protestant groups, such as the Salvation Army (founded 1865), which prescribes a characteristic bonnet for its women workers, and the deaconess societies in Europe and America. 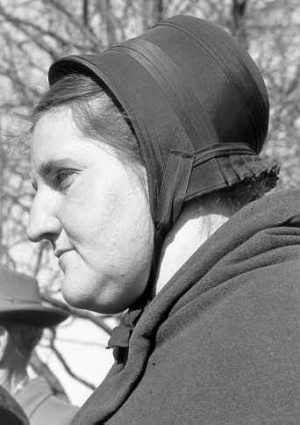 However, the bonnet prescribed for most of the 19th century and the first half of the 20th century by certain American Mennonite groups of Swiss-South German extraction for all women members was something quite different, more related to the insistence of certain Russian Mennonite groups that their women continue to wear the simple peasant cloth kerchief instead of a hat than to a special garb for nuns or religious workers. In both cases without doubt the desire to maintain simplicity and nonconformity to the world with its changing styles of headdress was a major motivating factor. However, the traditionalism of conservative rural culture in maintaining older forms of costume as over against the inroads of urban culture influences may also have played a part.

Another source of influence must be reckoned with, however, namely the Quaker bonnet. Since European Mennonites never had the bonnet practice for women, and since there is evidence that the oldest form of Mennonite and Amish headdress in Pennsylvania and Ontario was not the bonnet (the conservative "Nebraska" Amish women of Belleville, Pennsylvania, still wear a broad-brimmed flat hat, and no bonnet, and some broad-brimmed beaver hats of early and mid-19th century use have been preserved among descendants of both Ontario [[[Vineland (Ontario, Canada)|Vineland]]] Mennonite and Pennsylvania-Ohio Amish families) it is possible that it was Quaker influence which brought the bonnet into Eastern Pennsylvania Mennonite and Amish practice. In the Franconia Conference area the contact between the Quakers and Mennonites was particularly close, and in colonial and later Pennsylvania the common position of the two groups on nonresistance, simplicity, and the nonswearing of oaths, created a strong bond of sympathy. The almost identical appearance of the Mennonite and Quaker bonnets adds weight to this supposition. Fortunately A. M. Gummàre's careful study, The Quaker, a study in costume (Philadelphia, 1901), contains an excellent chapter on "The evolution of the Quaker bonnet" (187- 228), with illustrations. Photographs of two black Quaker bonnets of 1856 in this chapter could almost be taken for typical conservative Mennonite bonnets of 1950. It is true that during the 19th century the common headdress of American women also at times took on a form similar to the Quaker and Mennonite bonnet, and it is possible that the Mennonite bonnet was simply a retention of a type of headdress prevalent at a certain period, first retained by custom in resistance to style changes, and later required by religious and church sanctions.

Whatever the origin, the black bonnet, as distinct from the common woman's hat in various colors, became by the mid-19th century a prescribed part of the woman's costume in the United States sections of the Mennonite Church (MC), the Amish Mennonite Church, and all groups related to them. The more conservative the group, conference, or congregation, the more the older form of the bonnet (large size, front projection, and rear curtain down to the base of the neck) has been maintained. By the mid-20th century, however, in the Mennonite Church the bonnet had changed greatly in size and shape, becoming much smaller and more compact, and approaching in appearance the small close-fitting hat often worn by American women in the 1950s. In some sections the bonnet had almost disappeared among younger women, and in some congregations practically vanished altogether by 1960. The small size and simple character of much of the 1950s American woman's headdress made this transition easier than in earlier times. Usually a simple dark-colored soft hat was adopted as a successor to the bonnet.

In form and material the bonnet has gone through several changes which need not be detailed here. The Old Order Amish women still wear the slat-bonnet which was formerly quite common, in which strips (slats) of cardboard or some stiff material are inserted into the cloth of that part of the bonnet which projects over the face to hold its shape. The cloth of the rear part of these bonnets usually extends down to the shoulders, and the projection over the face is so long as to make it impossible to see the face except from directly in front. Amish little girls also wear the same bonnet from babyhood. The women of the Reformed Mennonites in Eastern Pennsylvania and Maryland wear an older style gray bonnet.

The Mennonite women of Ontario did not adopt the "American" bonnet until well into the 1920s. Before that they wore a variant type known as the "English" or "Queen Victoria" bonnet, which can be readily identified from the familiar pictures of Queen Victoria's later fife. This bonnet was, however, not a uniquely Mennonite style, and was much worn by older women of all denominations in England and Canada in the late 19th century, particularly by conservative Methodist and Baptist women.

Printed minutes and disciplines of various district conference of the Mennonite Church (MC).