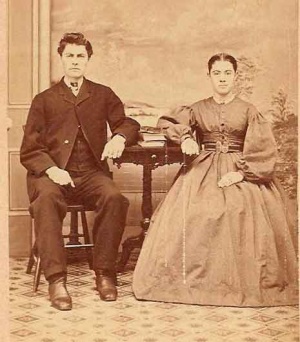 Benjamin B. Bowman: churchman and jeweler; born 14 September 1846 in Waterloo County, Ontario to Christian M. Baumann and Susannah (Baumann) Baumann. He was the second of four sons. He married Mary Ann Beeshy (28 February 1844-8 August 1881) on 4 Oct 1868; they had six children -- Martha, Albert, Ira, Lydia, Lyman and Dorinda. Then ca. 1882 he married Mary Katherine Stover (21 July 1850-22 September 1920), with whom he had three more children -- Odie, Norman and Karl. Benjamin died 4 October 1932 in Petoskey, Michigan, and was buried in the Greenwood Cemetery.

As a lay leader working with Solomon Eby and Daniel Brenneman, Bowman served as the annual conference secretary for several years, and was on the initial committee that established the denominational papers, Gospel Banner and Evangeliums Panier. He served as editor of the later paper for 16 months, beginning in January 1880. Bowman was also part of the committee that selected hymns for the first denominational hymnal (published 1881), and was a member of the committee that drafted the first church discipline (published 1880).

In 1879 he moved with his family to Goshen, Indiana where he was employed on the editorial staff of the Gospel Banner. Later he moved to Nappanee, Indiana where he engaged in watch repair. After his wife Mary Ann's death he returned to Waterloo, Ontario, then in 1883 moved to Petoskey, Michigan where he opened and operated a jewelry store for many years.

Benjamin Bowman was a significant lay leader in the early years of the Mennonite Brethren in Christ church. He remained active in the church, though he did not carry the same load as he did during the denomination's formative years.