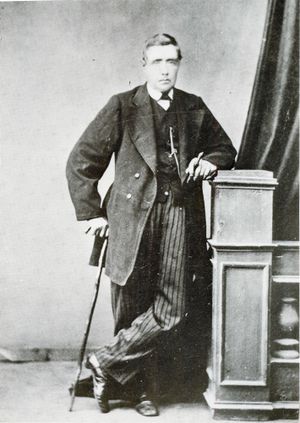 Kornelius Erdmann Buhr: delegate and farmer; born on 1 September 1826 in Nieder-Chortitza, Chortitza Mennonite Settlement, South Russia, to Erdmann and Maria (Driediger) Buhr, who had at some point changed their name from Bauer to Buhr. He was the third of four children in the family. In about the early 1850s, he married Elisabeth (or possibly Helena), whose first name is uncertain and whose last name is unknown. The couple had three children, all of whom survived to adulthood. Kornelius died of a heart condition in about 1885 and was buried on his estate near the Bergthal Mennonite Settlement, south Russia.

Together with his siblings, Kornelius grew up in Nieder-Choritiza in a farming community. He likely received a basic education before going to work on his parents’ estate. After his marriage, he purchased an estate in the area of the Bergthal Mennonite Settlement, which had been established in 1836 to relieve the strain of overcrowding in the older settlements. The estate, located near Mikhailovka between the Kalmus and Yelanchik Rivers, was previously owned by a Russian nobleman who had declared bankruptcy.

In 1873, Kornelius accompanied a delegation sent from Russia to explore the option of immigration to North America. Although he was not an official delegate, he traveled with the group sent from the Bergthal Settlement, paying his own expenses for the trip. The group left Bergthal for Canada in February 1873 and returned six months later, having spoken with government officials and visited various locations around the country, with a recommendation of immigration to Manitoba, where they believed the Mennonites could avoid military conscription and maintain their non-resistant stance.

On the advice of the delegates, the Mennonites of the Bergthal Settlement began to prepare for emigration. Although most of the people from the settlement decided to leave for Canada, Buhr and his family instead chose to stay, continuing to run his estate. Kornelius also tried unsuccessfully to discourage a nephew, Peter, from emigrating.

The estate where Buhr had established himself was located between the Bergthal Settlement and the train station and was therefore a stopping-place for emigrants on their way to North America. After most of the Mennonites in the area had moved away, German Lutherans began to establish villages and estates near the Buhr property, and eventually several families settled on the estate itself, where they worked for Kornelius and his family.

Running the estate kept Kornelius occupied for many years, but due to his heart condition, he hired another man, Hans Just, to supervise the workers. In about 1885, Kornelius died of his illness and was buried on the estate. His daughters were already married and living in homes nearby, and his son continued to live on the estate with his mother, who died in 1909.

Kornelius Erdmann Buhr was a dedicated estate owner who helped to build up a community in the area where he lived. Although he chose not to join the other Mennonites in immigrating to Canada, he had a profound influence on the departure of most of the Bergthal Settlement for North America, helping to provide a way for the people to begin their lives again and to preserve their beliefs and their community in a new country.