From GAMEO
Revision as of 20:06, 26 October 2017 by RichardThiessen (talk | contribs)
(diff) ← Older revision | Latest revision (diff) | Newer revision → (diff)
Jump to navigation Jump to search
A checked version of this page, approved on 26 October 2017, was based on this revision. 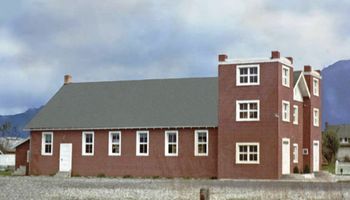 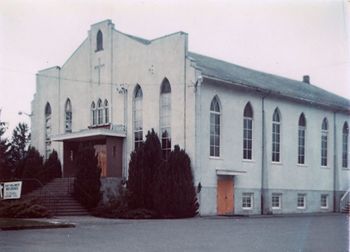 Mennonite Brethren in the East Chilliwack area began holding Bible studies in 1940. Their relatively small numbers began to increase in 1943 as Mennonites from Manitoba and Saskatchewan began to settle in the area. Fifteen families began renting a hall in 1944 and shortly thereafter began construction on their own building, thanks in part to a donation of one acre of farmland on Chilliwack Central Road. The church formally organized on 6 January 1945 as the East Chilliwack Mennonite Brethren Church with 82 charter members. The first building, technically built as a Sunday school hall due to wartime restrictions, was dedicated on 25 February 1945. Early leaders in the congregation were N. A. Rempel, Jacob I. Bergen, and Heinrich A. Kroeker.

In 1947, new classrooms were added and the front entrance was expanded. However, the population of Mennonite Brethren in East Chilliwack continued to increase rapidly, and in 1947, 60 families living close to the city of Chilliwack formed the Chilliwack (later Broadway) Mennonite Brethren Church. Nevertheless, membership continued to increase due to the continued relocation of Mennonite families from the Canadian prairie provinces to British Columbia, and a new building seemed necessary and imminent. Construction on a new sanctuary able to accommodate 400 people began in 1953 with a sod-turning ceremony held on 1 June 1953. The new church, measuring 50 by 80 feet, seating 500, and costing approximately $37,000, was completed in 1954, with a dedication service held on 15 August of that year. The former sanctuary was renovated in order to accommodate the East Chilliwack Mennonite Brethren Bible School, previously located down the road in a converted feed store, and to be used for Sunday School. Gerhard Thielmann, hired to teach at the Bible school, became the leading minister in the congregation and served throughout the 1950s and 1960s.

East Chilliwack's first paid pastor, Ben Heppner, began his ministry in 1970. Attendance gradually declined in the 1970s. A number of older members had joined Broadway Mennonite Brethren Church in the early 1970s, desiring to continue worshiping in the German language. By 1980, many families had moved to the city, so East Chilliwack MB Church sold their building to a Canadian Reformed congregation and relocated to the city as well. Their new building was completed for use by February 1981, at which time the congregation changed its name to Chilliwack Central Mennonite Brethren Church. In 2003 the name was changed to Central Community Church.

Throughout the 1980s and 1990s membership fluctuated due to occasional tensions in the congregation. However, significant attempts to reach out to the community resulted in steady growth through the first decade of the 21st century. In 2010 the congregation's membership was 340 with an average attendance of 600.

In 2013 two home groups that lacked a local church in Agassiz following the closure of their church, Mountain View Presbyterian Church, approached Central Community Church about forming a partnership. As a result, Central formally launched a second campus in Agassiz on 19 January 2014. Eldon Fehr was appointed to oversee Agassiz congregational needs. Services are held in the Agassiz Agricultural Hall.