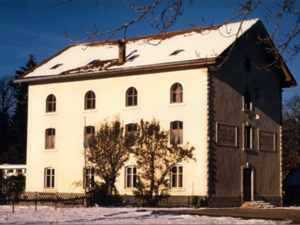 Chaux d'Abel, a Mennonite congregation on Mt. Sonvilier in the Jura district in the canton of Bern, Switzerland, listed as early as 1888 in Mannhardt's Jahrbuch, later merged with the Amish congregation La Ferriere, and was called Chaux d'Abel-Chaux de Fonds until 1923 (after 1930 Chaux d'Abel-Berg and Chaux d'Abel-Kapelle).

The ancestors of the present members settled here on the peaks of the Bernese Jura in the period of persecution as refugees, chiefly from the Emmental. They retained the German language in the midst of the French-speaking population. By emigration to America the church has suffered great losses since 1875. After a revival in 1892, the result of the work of Georg Steinberger, a preacher from the school at Rämismühle in the canton of Zürich, the congregation, assisted by the youth organization, erected a chapel in 1905.

David Ummel of Chaux d'Abel, an elder 1837-1896, an outstanding leader, founded a German school in Chaux d'Abel in 1862, and in 1903 donated the building to the congregation. On 5 February 1917 it burned down; in its place a new school was built with accommodations for 40 or 50 children and put into service on 4 November 1917. The German school was still in operation in 1952.