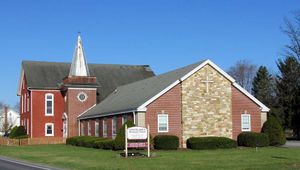 The Schaefferstown Mennonite Church, a Hope Mennonite Fellowship (HMF) congregation at Schaefferstown, Pennsylvania, USA had filled its building in the late 1980s. The congregation purchased a house in Port Royal, Pennsylvania and began holding Sunday services there in 1991 with Leon Horning serving as deacon. In August 1992, Stephen Miller was ordained as the first resident minister and served until he resigned in July 1995 to return to the Baptist church. Norman Bange served as interim pastor until December 1996 when Harlan Martin was ordained as minister. In April 2000, Joel Landis was ordained deacon.

In 2002, the Port Royal congregation purchased a church house from the Bunkertown Church of the Brethren near Cocolamus and changed their congregational name to Cocolamus Mennonite Church. J. Elvin Horst served as bishop at Port Royal and Cocolamus until Bernell Zimmerman was ordained bishop in 2005. They shared bishop responsibilities at Cocolamus for several years.

In 2016 the Cocolamus congregation participated in regular services in three different prisons and two retirement villages. The Cocolamus and Troxelville HMF congregations joined efforts in conducting a youth chorus that provided musical programs in various retirement homes, prisons, and a shopping mall.

The Cocolamus Christian School began in September 2001 in the former Mountain View schoolhouse in Evendale, Pennsylvania. Since September 2002 it has offered grades one through nine in the upstairs of the Cocolamus Mennonite Church. In January 2016, Cocolamus had 100 members.