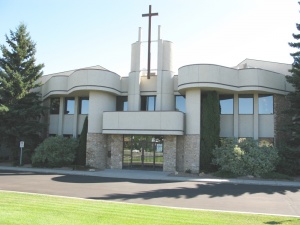 Mennonites settled in the reserve north of Saskatoon, Saskatchewan in the 1920s. The Depression caused some from rural areas to move to the city to look for a livelihood. World War II exposed others who served in Alternative Service Work Camps or in the military service to different lifestyles, and many chose not to return to their rural communities. The large rural families also found it difficult to find enough land for all of the next generation. Thus after the War many Mennonites moved into Saskatoon.

After some years of increasing isolation from the Conference of Mennonites of Saskatchewan because of doctrinal concerns, the congregation withdrew from the Saskatchewan conference and Mennonite Church Canada in early 2006. It is now an independent evangelical congregation.