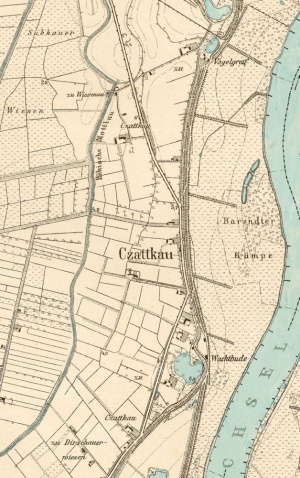 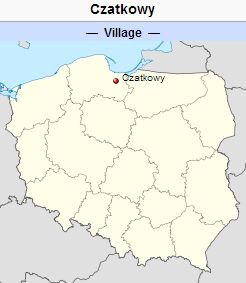 Czattkau was founded in the 14th century and was owned by the Cistercian monastery in Pelpin. The area was re-settled in 1774 by 14 Mennonite families. Until 1772 Czattkau was located in what was known as Royal Prussia (also known as Polish Prussia) in the Kingdom of Poland. The First Partition of Poland in 1772 resulted in the creation of a new province on 31 January 1773, called West Prussia, in which the village was located. Czattkau was situated in the district (Kreis) of Preußisch Stargard in Regierungsbezirk Danzig from 1815 until 1887, when it became part of the district (Kreis) of Dirschau. At the end of World War I, it came under the jurisdiction of the Pomeranian Voivodeship of the Second Polish Republic. The village came under the control of Nazi Germany during World War II until March 1945, when it was occupied by Soviet forces and returned to Poland. In 2013 Czatkowy was a village in the administrative district of Gmina Tczew, within Tczew County, Pomeranian Voivodeship.

The Prussian census of 1776 lists 17 Mennonite families in Czattkau with the following surnames: Boschmann, Claasen, Dick, Ens, Heidbrecht, Manteler, Tiesen, Wall, Wiens, and Willms. In 1820, Czattkau and Vogelgreif, located immediately to the north of Czattkau, had 151 residents, including 71 Mennonites. In the second half of the 19th century, the village had 2,091 morgas (1,251 hectares) of land, 28 houses, and 132 residents, including 48 Mennonites. In 1935 Czattkau had 10 Mennonite families that were members of the Heubuden Mennonite Church with the following surnames: Mierau, Regier (four families), Riesen (four families), and Willems.