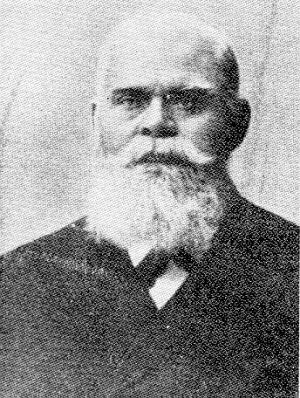 Not much is known of David's childhood and early youth, except that he grew up in a Mennonite (not Mennonite Brethren) home. He did not have the opportunity for educational advancement in his youth; since he was not interested in becoming a farmer, he studied independently to prepare himself for the teaching profession. He taught first in the village school of Margenau. By his use of modern methods of instruction, his excellent discipline, and his friendly relations with the pupils and their parents he set an example to his younger colleagues, who looked up to him as their leader.

Before long the Margenau Mennonite Church chose him as minister. About this time he underwent a deep spiritual experience, as a result of which his preaching differed from the customary sermon in content and manner. Instead of reading aloud to his congregation for an hour or more from the yellowed pages of the sermons used by the previous generations, he spoke freely and directly to his audience, reviving the religious life of the congregation and leading many to conversion. Though his innovations also evoked some hostility, he was one of the most sought-after speakers for special services and conferences among all the Mennonites of South Russia.

His type of piety brought him in close contact with the Rückenau Mennonite Brethren congregation; he felt at home in this circle. His desire to live only in accord with the word of God, to build the church on the apostolic pattern, and the warm fraternal love he found in Rückenau must have influenced his decision to leave the Margenau congregation and unite with the Rückenau Mennonite Brethren Church. At first there was some tension between the Mennonite Brethren and the Mennonites in consequence of this step, but his conciliatory manner and his obvious devotion and spiritual depth soon overcame this tension, and he was again invited to preach in Mennonite pulpits.

For a time Dürksen tried to do justice to both his teaching and preaching offices, but soon gave up his beloved school to devote himself entirely to preaching. He was appointed as traveling evangelist by the Mennonite Brethren Church, serving in this capacity with outstanding success. He preached in nearly all of the Mennonite churches in both European and Asiatic Russia, in many Mennonite Brethren churches of North America, and also in West Prussia. He also took part on one occasion in the Blankenburg Alliance Conference at Blankenburg, Germany.

Dürksen was also an able writer. Unfortunately most of his powerful addresses were never put in writing, but whenever he found time he wrote for the Zionsbote and the Abreisskalender, as well as other periodicals.

Dürksen's most successful field of service lay perhaps in his work on the Crimean Mennonite school board, of which he became a member soon after his ordination as elder. His wide experience and understanding of human nature did much to raise the standards of Mennonite education. The Zentralschule in Spat and Karassan and the Crimea Mennonite girls' school were the result of his influence.

In 1897, the Spat-Schöntal congregation extended a call to David to assume responsibility for leadership of the growing Mennonite Brethren constituency. Knowing that this might somewhat limit the sphere of his activities in the local area, he nonetheless accepted and moved to Schöntal. Dürksen was ordained elder of the Spat Mennonite Brethren Church in 1899, with Elder Aron Lepp of Chortitza and Elder David Schellenberg of Rückenau presiding. The Spat-Schöntal congregation became organizationally independent, with sanctuaries in Spat (1887) and Schöntal (1905). In 1902, membership stood at 330, with 500 additional adherents.

Dürksen was called “a prince among Mennonite preachers.” Even when he had specific obligations in the Crimea, his heart was in evangelism; he was also called upon to speak at many special occasions. His sermons were always “very well worked out, and prepared on his knees.” He preached with deep conviction and great enthusiasm. The question of open communion which plagued the Rückenau church also flared up in the Crimea, a controversy that caused him some difficulties towards the end of his career. David eventually sided with those who wanted to restrict communion to baptized members only.

Over the 18 years he worked as a teacher, David Gerhard Dürksen became well respected in his profession. In the Crimea, he was also a member of the board that supervised the teaching of religion and German in the schools. He organized monthly youth meetings (Jugendvereine); he not only planned them, he also wrote poems, plays, and songs for the programs. He wrote extensively; one hundred of his sermons are extant and testify to his widespread concerns. Late in 1909, David Gerhard Dürksen became ill, and after nine months of painful suffering, he died on 29 July 1910.

David Gerhard Dürksen was a dedicated teacher and preacher who used his considerable gifts to benefit the communities in which he lived. Despite having been involved in some controversies, he seems to have been able to bridge gaps between people to continue his ministry. For more than two decades, he was one of the strongest influences in the Russian Mennonite churches for the awakening, nurturing, and furthering of spiritual life.

Huebert, Helmut T. Events and people: events in Russian Mennonite history and the people that made them happen. Winnipeg: Springfield Publishers, 1999.