Difference between revisions of "Danzig (Poland)" 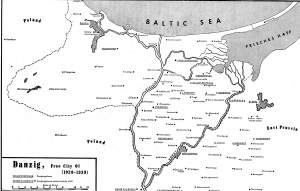 Danzig, a government district (Regierungsbezirk) of the province of West Prussia, before the partition in 1918 containing nearly one-third of the Mennonites living in Germany, most of them in the triangle formed by Danzig (city), Elbingand Marienburg. Whereas in the townships of Marienburg and rural Elbing the number of Mennonites decreased after World War I, it rose in the townships of Danzig-City, Danzig-Lowland, Danzig-Heights, and Elbing-City. Also in the township of Neustadt, particularly in Zoppot, more and more Mennonites settled.

From 20 January 1920 to August 1939 the old district of Danzig was displaced in part by the Free City of Danzig, a politically independent state under the League of Nations. In 1939-1945 it was called "Regierungsbezirk Danzig," and was part of the "Reichsgau Danzig-Westpreussen." With the conquest of Germany by the Allied powers in 1945 and the reconstitution of Poland, the area was incorporated into the Polish governmental system, with the Polish name Gdansk.

In 1947 the Mennonite Central Committee established a relief program in the Danzig area, to which it had been directed by the Polish government, with headquarters in Tczew (Dirschau). It conducted relief there until the fall of 1948, when the Polish government in effect compelled the transfer of the work to Nasielsk near Warsaw. During the 1947-1948 period many Mennonites were aided together with the general population. In 1947 there were still over 200 Mennonites in this region, nearly all of whom were permitted to go to Germany in 1947-1949. A few individuals and one or two families of Mennonites have remained in the city or its environs.

Census figures show the following Mennonite populations in the various parts of the district: