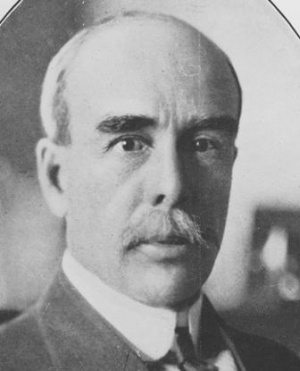 Colonel John Stoughton Dennis, C.M.G. (Companion to the Most Distinguished Order of St. Michael and St. George):  surveyor, immigration agent, railroad executive; born 22 October 1856 at Weston, near Toronto Ontario, the son of John Stoughton Dennis, Sr. (1820-1885). He died 26 November 1938 in Victoria, British Columbia. Politically Colonel Dennis was Conservative and a member of the Anglican Church. His father was also a distinguished surveyor whose confrontation with Métis was partly responsible for the 1869 Red River Rebellion.

In 1872 "J. S." Dennis Jr. started to go west for the summer with land surveying parties and in 1874 he witnessed the arrival of Mennonites in Manitoba on the steamer International. He studied engineering at the Royal Military College, Kingston, Ontario and became a land surveyor and an advocate of prairie irrigation. Dennis worked in western Canada first for the Hudson Bay Company, then the government of Canada and then in private practice. In 1885, during the Riel Rebellion, he was appointed to the rank of Captain and led a group known as Dennis Scouts. From 1885 to 1896 he was Chief Engineer and Deputy Commissioner of Public works in the Government of the North West Territories. For the next six years he was Superintendent of Irrigation and in 1902 joined the Canadian Pacific Railway (CPR).

J. S. Dennis became chief engineer of construction of CPR irrigation projects. Later, he was appointed manager of the Irrigation and Land Branch and, in 1912, when the Department of Natural Resources was formed, he became assistant to the president and head of the new department. The CPR then made him Chief Commissioner of their Colonization and Development Department. During World War I, Dennis was appointed with the rank of lieutenant-colonel and was later promoted to colonel.  In this role he proceeded to Siberia as director of transportation and intelligence on the general staff of the Canadian Brigade. During 1918, he acted as Canadian Red Cross Commissioner in Russia and a Canadian Trade Commissioner in the same territory. Here he gained a good acquaintance of conditions in Russia. On 1 January 1930, Col. Dennis retired from the CPR but remained a member of an advisory committee.

For building a railway spanning Canada the CPR had received part payment in the form of land, about 10 million hectares (25 million acres). The CPR wanted to settle farm families on this land in order to profit through transport of people and goods. In the quarter century from 1905 to 1930 the CPR spent more on prairie immigration and settlement than the federal government spent.

Over the years Col. Dennis had come to know Mennonites well and was impressed with their industry, pioneering skills and honesty. Early in the World War I Col. Dennis drew the attention of the CPR to the possibility of mass Mennonite immigration from Russia noting in particular their scruples against bearing arms. Though no immigration occurred during the war, in 1921 and 1922 Col. Dennis welcomed Canadian Mennonite Board of Colonization delegates, Gerhard Ens and David Toews of Rosthern, Abram A. Friesen who immigrated to Saskatchewan in 1920, H. H. Ewert of Manitoba and others. The CPR, through energetic efforts of Col. Dennis, offered transportation credits and facilities to the Mennonites if the Canadian Mennonite Board of Colonization would guarantee repayment. Though the CPR almost never extended credit, it did so to Mennonites in part because Col. Dennis highlighted their reputation for paying their debts particularly repayment of the loan to the 1874 immigrants. Dennis also received support from Sir Augustus Nanton, a major CPR shareholder, president of the law firm Osler, Hammond, and Nanton which had done many business transactions with Mennonites. On 20 June 1922 Dennis informed David Toews that the CPR was willing to grant transportation credits to an initial group of 3,000 Mennonites.

In July 1922 through Col. Dennis the CPR offered Mennonites a formal contract offering to bring 2,642 Mennonites to Canada for a cost of $400,000. The terms were 25% with in ten days, next 25% in three months and the balance in six months with an interest rate of 6%. Many in the Canadian Mennonite community thought the terms were impossible to meet and counseled against signing. Even though he knew he could not meet these terms and that the CPR contracted with "the Mennonite Church of Canada" an organization that did not exist in the much divided Canadian Mennonite community, in one of the most dramatic acts in Canadian Mennonite history David Toews signed the contract on 21 July as Chairman of the Mennonite Board of Colonization. Most likely Col. Dennis knew of these deficient conditions with the contract but trusted Mennonites enough to participate in the agreement.

Though Col. Dennis worked vigorously to bring Mennonites into Canada disease and changing circumstances in the Soviet Union delayed most immigration until 1923 when 2,759 immigrated. In April 1923 a second formal agreement was signed between the Board and the CPR and now both credit and paying passengers were included. These contracts now enabled 5,000 Mennonites to immigrate in 1924. A further contract was negotiated in 1925 even though the terms of the previous contracts had not been fully met. The CPR was a business and it often pressured the Board to make further payments, however, it continued to extend credit and by 1930 when Col. Dennis retired, 13,354 credit passengers had come to Canada. A total credit of $1,767,398.68 was extended by the CPR. The unpaid travel debt, which was often known by its German name Reiseschuld, in 1931 amounted to $1,040,727.  The Great Depression made the travel debt a vexing problem as most immigrants could not even pay the 6% interest on the debt. In the 1930s and 1940s the CPR actually forgave significant portions of interest and debt amounting to over $1. million dollars.  The last portion of the debt was paid in 1946.

In 1937 at Coaldale, Alberta's 10th anniversary, a service of thanksgiving was held honouring Col. J. S. Dennis and CPR President Sir Edward Beatty. In that same year David Toews wrote "When we needed a friend, we found him in the person of Colonel J. S. Dennis."  For many Canadian Mennonites Col. Dennis became one of the indispensible men in the rescue of Mennonites from the Soviet Union.

Epp, Frank H. Mennonite Exodus: The Rescue and Resettlement of the Russian Mennonites Since the Communist Revolution. Altona, Manitoba: Published for Canadian Mennonite Relief and Immigration Council by D.W. Friesen, 1962.