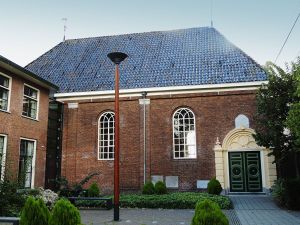 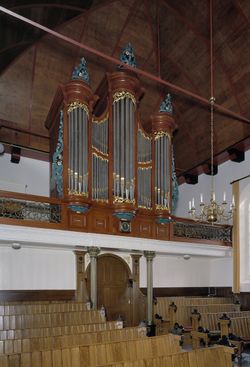 Drachten en Ureterp is a Mennonite congregation in the eastern part of the Dutch province of Friesland, about 15 miles (25 km) southeast of Leeuwarden and 14 miles (23 km) northeast of Heerenveen. The congregation, which formerly belonged to the Groningen Old Flemish Mennonites, was apparently founded in the first part of the 17th century, when Drachten arose as a peat-cutting center. After the peat had been removed, the soil was suited to farming. The earliest account of a Mennonite congregation here is of 1645, though the congregation may have been older. In February 1645 a meeting was held in the home of Jan Wibbes, a shoemaker. From the beginning the congregation was closely connected with the Mennonites of nearby Ureterp, who were farmers, and Ureterp should perhaps be considered as the oldest kernel of the congregation. As Drachten grew, more Mennonites moved to Drachten, and about 1690 a meetinghouse was built at Drachten. The membership then (1695) was 82.

Of its history little is known. Its members were mostly peat-diggers, farmers, and a few sailors, who were absent from their home town from about February to November. For this reason, as in other towns of Friesland, where sailors formed a considerable part of the membership, like Grouw, Joure, and Warns, baptism and communion services were formerly not held just before Easter, as is common in Dutch congregations, but at the end of January or the first Sunday of February. It is not quite clear whether Drachten and Ureterp were two more or less independent congregations or only one. Since the beginning of the 18th century the name of the congregation has been "Drachten en Ureterp." It developed peacefully; in 1695 it joined the Mennonite conference of Friesland (Friesche Societeit), founded in that year. It soon became more progressive in church practices, abandoning the old Flemish practices like feetwashing and silent prayer. In 1708 a small group of conservative members, wishing to maintain the old principles and practices, separated from the main body; this group, the membership of which in 1710 was only 14, was dissolved in 1787.

The main congregation grew steadily both in membership and spiritual strength. This was due in large part to the apt leadership of its lay preachers, including Albert Sybolts (1690-ca. 1745), his son Sybolt Alberts (1718-1767), his grandson Albert Sybolts Jr. (1744-1779), and Sybolt (1780-1809) and Tjalling Arends (1789-1805). The descendants of Tjeerd Arends, a brother of Sybolt and Tjalling, are still numerous in the congregation (see Arends family).