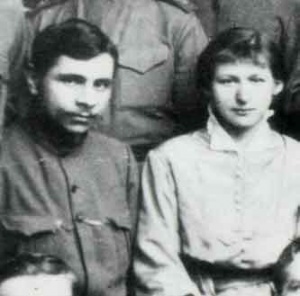 Jakob J. Dyck was born 7 December 1890 in the Crimea, South Russia, to Jacob J. and Sara (Reimer) Dyck, who owned a large ranch. He was the fifth in a family of nine children. He completed his secondary education in the Crimea and then went to Ilmenau, Germany, to study engineering, and worked for some time as an engineer in Berlin. Just before World War I he returned to Russia and in 1914 entered the medical service (Sanitätsdienst) in Moscow. On 26 August 1916, he was married to Tina Fehderau of Neu-Halbstadt. To this union one son was born, who died in infancy. 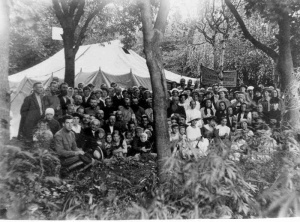 Jacob J. Dyck was converted at the age of 17 under the preaching of Johann Warns, and was received into the Rückenau Mennonite Brethren Church, Molotschna. Immediately he manifested a special interest in the salvation of his fellow men, and distinguished himself by his leadership in fostering Christian organizations among the men during the war. Upon his release from the medical service he devoted his talents to evangelism in tent-missions, preaching the Gospel and traveling from village to village with his colaborers until he and his party were seized while conducting evangelistic meetings by Makhno bandits in the village of Eichenfeld, Yazekovo settlement, and murdered on 26 October 1919. The former Mrs. Jakob J. Dyck later migrated to Kitchener, Ontario.