From GAMEO
Revision as of 01:56, 11 March 2019 by AlfRedekopp (talk | contribs) (→‎Bibliography)
(diff) ← Older revision | Latest revision (diff) | Newer revision → (diff)
Jump to navigation Jump to search
A checked version of this page, approved on 11 March 2019, was based on this revision. 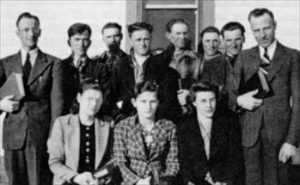 Among the Mennonite Brethren who settled in Saskatchewan around 1900 were number of Russians at Eagle Creek (later Arelee). Some of the Dukhobors settled at nearby Blaine Lake. Hermann Fast was the first preacher among the Russians and Dukhobors in Saskatchewan. Other itinerant evangelists among them in the 1940s were Abram Huebert, Leamington, and Henry H. Janzen, Kitchener. Janzen was the Conference-appointed supervisor for evangelism, beginning in 1943, and was helpful in training persons for work among the Russians when he was principal of the Russian Bible College in Toronto (1945-48). After that the newly-created Canada Inland Mission (CIM) of the Canadian Conference accepted responsibility for the Russian work.

Meanwhile, David Bernhard "D. B." Wiens, a graduate of Bethany Bible School, Hepburn, worked among these Russians, beginning in 1943, first under the auspices of the Western Children's Mission (WCM), the mission arm of Bethany, and then under the CIM. While he spoke an excellent German and had learned English, at that time his Russian was limited to an everyday Russian learned in the Ukraine where he was born.

In 1943 Wiens turned to a Bethany and WCM colleague, Louis Goertz, to assist him in opening a Bible school for Russian youth. They met in a house in Arelee. A picture dating from that year shows nine students, three women and six men. Several of the students pictured here went on to other schools and served in missions abroad.

In his biography of Wiens, Ratzlaff concluded that the Bible school likely did not continue because there was no further mention of it [after 1943-44]. In fact it is doubtful whether the school continued for a full year. Reports from the provincial conference for the next years do not mention this school. What is more, Goertz soon left because the school could not support two teachers. Wiens may have continued with some evening classes. The school may have had a short life because Wiens, who was named a second assistant to the pastor, found teaching in Russian difficult. Goertz knew even less Russian..

In all, Wiens served for a decade among these Russians, including Dukhobors, most of the time as an itinerant, supported by the conference at $780 a year. Although Wiens was not popular among these Russians because his demeanor was too unbending, he achieved one of his primary goals in life -- to preach in Russia some day. As a result of this immersion into Russian life, Wiens was chosen to accompany Harold Bender to the Soviet Union in 1956. Later he served for many years as the speaker for broadcasts to Russia via MB Communications, Winnipeg.