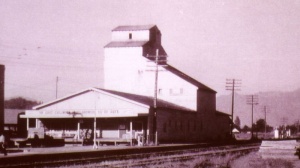 Mennonites from the Canadian Prairie provinces began to settle in the East Chilliwack area of the Fraser Valley in British Columbia in the early 1940s. Most of these settlers had suffered severe crop failures during the 1930s, and were looking for a stable agricultural industry and a more moderate climate. The Mennonites purchased existing dairy farms that were being sold by farmers whose sons were choosing not to carry on farming. The high demand from the British Commonwealth for fruit, World War II federal regulatory price and supply controls, and an ideal climate created favorable conditions for the expanding of these dairy operations to include the growing of raspberries and strawberries. Incomes were further bolstered by adding poultry and hog raising operations.

Several small fruit growers cooperative associations already existed in the Fraser Valley, and many of the Mennonite settlers were familiar with wheat pools and farm supply cooperatives in the Canadian Prairies. As a result, a number of farmers met to explore the formation of their own cooperative for the joint marketing of their raspberries. On 17 February 1947, 23 farmers, all Mennonites, formed the East Chilliwack Fruit Growers Co-operative Association. Peter J. Esau was selected as the Co-op’s first president. The East Chilliwack United Church community hall was purchased along with berry processing equipment.

The first year of operation, 1947, was a success, with post-war Great Britain purchasing the entire production of 300 tons of raspberries. A new berry processing plant was constructed adjacent to the original plant the following year, and Jacob J. Klassen was hired as the Co-op’s general manager. However, 1948 brought about a reversal of the success experienced in the Co-op’s inaugural year. With the end of the war measures act, Britain was no longer dependent on Canada for its raspberry imports, and the financial return to the grower decreased by 50%. Changes in the sale of its product resulted in a change of approach. The solution was to expand the co-op's operating base by entering the feed supply business, a move that was compatible with the mixed farm operation of its members. Over the next several years, strawberries, blackberries, prunes, apples, and pears were processed. Raspberries were initially packed in 400-pound oak barrels and preserved with sulfur dioxide. After a few years, this shifted to frozen and fresh packaging. By 1963, with the closure of the Sumas Prairie Growers Co-operative, annual production had increased to 1,000 tons. 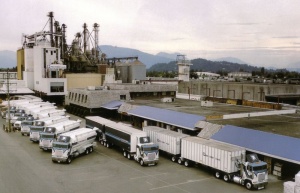 In 1949 the original location was converted to a dairy feed mixing plant and a feed stock warehouse. By 1950 poultry feed mixing was introduced. By 1951 the feed division surpassed the fruit division in operating volume. In 1952, the Co-op purchased a packing plant from the Pacific Co-operative Union on Nowell Street at Railway Avenue in the city of Chilliwack at a cost of $35,000 and converted it into a feed mill. This gave the Co-op access to a railway siding. At that time, the Co-op had 180 members. Two years later, when membership had climbed to 275, an elevator was built in 1954. In 1956 the Pacific Co-operative Union fruit processing plant was purchased on the southern side of the rail siding for $20,000. 1956 also saw the beginning of the settlement of Dutch dairy farmers in East Chilliwack, leading to the modernization and growth of the dairy industry. Membership had reached 368.

In 1958, when membership had reached 500, four acres adjacent to the fruit processing plant were purchased for $17,500, and by 1960 the Co-op had constructed a state of the art feed manufacturing plant – one of the first all steel feed mill structures in all of Canada. The mill, built at a cost of $430,000, could produce 100-tons of feed per day. In the same year, a large warehouse and farm supply center was also opened. The mill was continually expanded in from the late 1960s through to the 1990s. The Co-op continued to grow with the acceptance of Chilliwack Central Co-op members after their mill burned in 1968.

The Co-op was a leader in adapting advancements in both nutritional science and mechanical engineering. It was the first in the feed industry to introduce hopper-bottom, bulk feed delivery with compartmentalized enclosed bulk trucks. This replaced the handling of bagged feed. Coast Agri Fertilizers Ltd. was purchased in the 1970s in order to provide a full range of crop products and services.

In 1981 the East Chilliwack Fruit Growers Co-operative Association was divided into three associated co-operatives: the Fruit Growers Co-op, the Agricultural Co-op, and the Consumers’ Co-op. A large fruit and vegetable processing/juice plant was constructed to the east of the feed mill. However, in the following years the fruit division experienced financial difficulties and in 1988 the plant was sold and the Fruit Growers Co-op was concluded. In 1994 the Consumers’ Co-op’s assets were sold to the Agricultural Co-op, and the organization returned to operating under one co-operative umbrella.

In 1993 the feed division was incorporated into Pro Form Feeds Inc. Pacific Extruding Ltd. in Langley was purchased in 1994 to allow the Co-op to expand into the pet food manufacturing and distribution business, and in 1996 the Co-op purchased Richardson Seed Company Limited. The Co-op that began with a $973.00 investment in 1947 grew to the point where, by 1997, they had annual sales in excess of $100 million.

Shortly after their 50th Anniversary in 1997, Co-op members approved a restructuring proposal to exchange co-operative shares for corporation shares, and with that decision a new company, Agro Pacific Industries Ltd. was formed in December 1997. On 28 July 1998, Agro Pacific made its debut on the Toronto Stock Exchange..