From GAMEO
Revision as of 00:54, 5 December 2018 by AlfRedekopp (talk | contribs) (Created page with "__FORCETOC__ __TOC__ 300px|thumb|right|''Henry Enns, leader for the rights of disabled people'' Henry Enns: Canadian activist, leader for the right...")
(diff) ← Older revision | Latest revision (diff) | Newer revision → (diff)
Jump to navigation Jump to search
A checked version of this page, approved on 5 December 2018, was based on this revision. 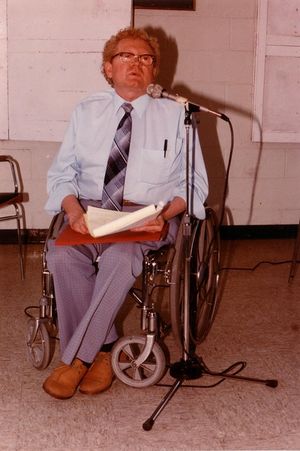 Henry Enns, leader for the rights of disabled people

Henry Enns: Canadian activist, leader for the rights of the disabled, and leader for the independent-living movement in Canada; born 29 May 1943 in Baburka (formerly Burwalde, Chortitza), Ukraine, to George C. Enns (1912-1992) and Anna (Dyck) Enns (1916-2013), as the oldest of nine children (2 sons and 7 daughters). Henry married Dr. Olga Krassioukova in 1996, and became the father of her son. He died on 13 August 2002 in Colombo, Sri Lanka, while traveling on business. Henry Enns’ family settled in Steinbach, Manitoba, Canada, in 1954 and were members of the Steinbach Mennonite Church. At age 15, Henry contracted rheumatoid arthritis and four years later he was confined to a wheelchair for the rest of his life. He attended the University of Winnipeg, earning a B.A. in 1966, and he attended the University of Manitoba, where he earned a degree in social work in 1978. Beginning with the Manitoba League of the Physically Handicapped (1976 to 1979), Henry was active as one of the founders of the Coalition of Provincial Organizations of the Handicapped. In 1980 he accepted a two-year assignment with Mennonite Central Committee (Canada) working with Handicapped Awareness in the Mennonite constituency. From his Winnipeg base, he became increasingly active in the international disability rights movement, and in 1981 he was a prominent figure in the United Nations International Year of Disabled Persons. He helped found the Disabled People’s International (DPI) in 1981, and was instrumental in bringing its office from Stockhom, Sweden to Winnipeg. From 1990-1995 he served as the executive director for DPI. Henry Enns initiated the first Independent Living Centre in Canada in Kitchener, Ontario, in 1982 and was a founding member of the Canadian Association of Independent Living Centres in 1985. In 1995 Henry Enns played an influential role in establishing the Canadian Centre on Disability Studies (CCDS), and was serving as its Executive Director at the time of his death in 2002. The CCDS lobbied for the establishment of a master’s program in Disability Studies at the University of Manitoba, and in June, 2002, the Honourable Minister Tim Sale, Manitoba Minister of Family Services, announced the program would begin in 2003. At Henry’s funeral, Tim Sale, one of the eulogists, praised Henry for having remained grounded in the disability community, which had changed the world’s thinking on disability. In 1988, Enns was recognized by the Canadian Government with a Citation for Citizenship, presented by the Canadian Secretary of State. In 1992, he received the U.S. President’s Award for Humanitarian Service, the first non-American to be so honoured. Queens University (Kingston, Ontario) conferred him with an Honorary Doctor of Laws in 1992, followed in 1993 by a second Honorary Doctorate of Laws from the University of Manitoba. In 1982, the Canadian government included Henry in a delegation drafting the UN World Program of Action for the Decade of Disabled Persons. Prior to the rise of the advocacy movement, people with disabilities were not appointed to government delegations crafting public policy. This document formed the basis of the United Nations’ Convention on the Rights of Persons with Disabilities (CRPD) in 2006. In the book entitled, In Pursuit of Equal Participation: Canada and Disability at Home and Abroad, edited by Henry Enns and Aldred H. Neufeld, and published post-humusly, Enns documents Canada's considerable international experience in seeking to eliminate the disadvantages experienced by disabled people around the world. This book presented information and analysis concerning disability issues both in Canada and internationally. Henry Enns was truly a visionary. He saw endless possibilities in all that he did. His life was a continuous journey in advancing the cause of disabled people.