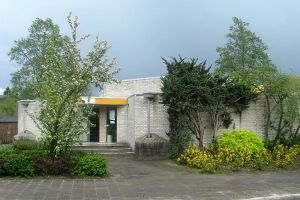 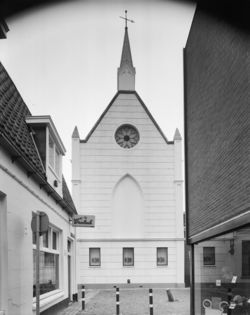 The idea that the Mennonite congregation was founded about 1530 by Waldensian weavers, who had moved from Flanders to Twenthe (P. Beets, Aanteekeningen in Hoop Scheffer, Jacob Gijsbert de, I, No. 757), has been proved to be false. Probably it was founded by Mennonite immigrants from Westphalia. It really arose some decades after most of the congregations in the Netherlands had been founded; nothing is known of it before 1580. The most prominent families in this congregation, all of Westphalian descent—van Lochern, Blijdenstein, Paschen, Stenvers (i.e., Steinfurters), were among the founders of the present large textile industry in Enschede. In 1620 some well-to-do members of the Burgsteinfurt congregation in Westphalia settled in Enschede, among them Hendrick Gerritsz and Everwijn Franken. For a long time meetings were held in a private house, the membership being very small. In 1698, when Isaac Paschen was a preacher, a room in the van Lochern house was enlarged and adapted for church meetings; it was not until 1769 that a church was built, dedicated on 17 December of this year with a sermon held by the minister Cornelis de Vries, which was published: Inwijdingsreden over de tempels . . . (Amsterdam, 1769). In 1786 an organ was placed in this church.

In the second half of the 17th century and the 18th century the congregation belonged to the conservative Zonist wing of the Dutch Mennonites. By the end of the 18th century much had changed. The prominent members were Patriots and were politically liberal. In 1795 the Mennonites in the Netherlands were recognized on an equal basis with the Reformed. Jacob H. Floh, minister of the congregation, became (in 1796) a delegate of Twenthe to the lower house of the States-General, as was Jan B. Blijdenstein, a member of the congregation. In 1810 this Jan Blijdenstein was appointed burgomaster of Enschede.

The first trained minister here was Cornelis de Vries, mentioned above, 1763-1771. He gave his considerable library of Mennonite and other books to the congregation (Blaupot t. C., Groningen I, 222). This library also perished with the church, when a fire devastated a large part of the city on 7 May 1862. The church, which was completely destroyed, was rebuilt on the same spot at Stadsgravenstraat 59 and dedicated on 2 May 1864. This building was enlarged in 1952 and used until 1970. In 2014 the building was a discotheque.