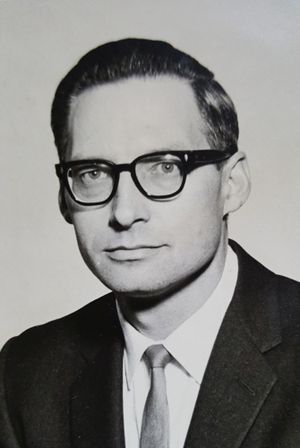 Gilbert graduated at age 16 from school in Laird, Saskatchewan. He was unable to pursue further education due to World War II, during which time he worked on his father’s farm so as to be exempt from military service. Gilbert was baptized in the Laird Mennonite Church in Saskatchewan by Rev. John G. Rempel.

Gilbert worked for a bank in Laird before beginning his career with the Canadian Imperial Bank of Commerce. He rose through the ranks, working as teller, loans accountant, branch manager, inspector, and auditor, and worked in Mission, BC, Creston, BC, Burnaby, BC, Clearbrook, BC, and Calgary, Alberta. During those years, Anne served as a Sunday School teacher, choir conductor, pianist, member of Ladies' Aids, and as treasurer of the BC Mennonite Women's Conference. Gilbert retired in 1982 in Calgary, Alberta.

Epp was involved in the life of the Mennonite Church from an early age. As an adult, he was interested in finances and stewardship. From 1959 to 1967 Gilbert was the treasurer of the Conference of United Mennonite Churches in BC. This was followed by a position as chairman of the Finance Committee for the same conference, a position he held until 1972 and one which also involved attendance in Winnipeg for meetings of the Finance Committee of the Conference of Mennonites in Canada. As a result of this work, Epp became instrumental in forming Mennonite Foundation of Canada Inc (December 1973; renamed Abundance in 2016). In 1985 Gilbert Epp was appointed to represent the Conference of Mennonites in Canada on the board of Mennonite Foundation, which he did until 1988. He then volunteered as an internal auditor for Mennonite Foundation on several occasions. In 1992 Gilbert represented British Columbia on an interim board established by MCC Canada to oversee the latter’s SelfHelp operations and remained on the board for one year after it became permanent in 1994. In 1993 Epp became a member of Mennonite Foundation, representing British Columbia, and in 1995 was elected a director and Treasurer.

Gilbert also made contributions in less formal volunteer positions – he was a member of the first search committee charged with locating a suitable site for a children’s camp for the BC Mennonite Youth Organization. In October 1961, the site where Camp Squeah is now located north of Hope, BC, was purchased. During the early years of their retirement, Gilbert and Joy volunteered at Camp Squeah, building picnic tables and a play structure; repaired items to be sold at the SelfHelp store, and worked for two weeks in Cachipay, Colombia with SOOP (Service Opportunities for Older People).

Gilbert Epp was a man of great integrity, showing his faith by his honesty, fairness, and dedication in all aspects of his life, whether at home, at work, or in the church.