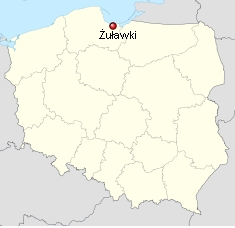 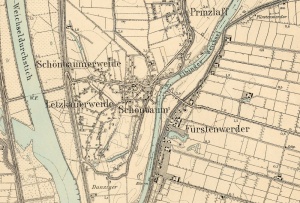 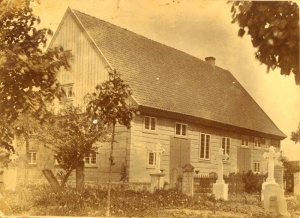 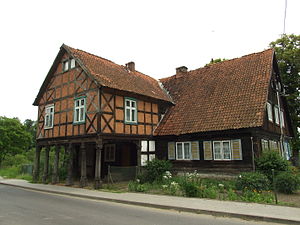 Fürstenwerder was established by Winrich von Kniprode in 1352 under the Chełmno law (Kulm Law, a legal constitution for a municipal form of government) for 18 colonists. At the time, also a parish church was erected. In 1510, the village had 26 homesteads, including a village leader's farm, a parish priest, and 3 inns. During the following half century, the number of farms and inns decreased. In 1659, the village was burned by the Swedish army.

Until 1772 Fürstenwerder was located in what was known as Royal Prussia (also known as Polish Prussia) in the Kingdom of Poland. The First Partition of Poland in 1772 resulted in the creation of a new province on 31 January 1773, called West Prussia, in which the village was located. Fürstenwerder was situated in the district (Kreis) of Marienburg until the establishment of the Free City of Danzig in 1920. The village came under the control of Nazi Germany during World War II until February 1945, when it was occupied by Soviet forces and returned to Poland. In 2013 Fürstenwerder (now known as Żuławki) was a village in the administrative district of Gmina Stegna, within Nowy Dwór Gdański County, Pomeranian Voivodeship.

Fürstenwerder was the name (since about 1830) of an independent Mennonite congregation, which formerly belonged to the "Flemish Mennonite congregation in the Grosse Werder" and was called the "Bärwald'sches Quartier"; from 1809 on was known as Bärwalde and had its own elder (Isaac Schulz, 1809-1834). Since 1768 there had been a meetinghouse in Fürstenwerder, which had been preserved without any important alterations until 1990. In 1768 the bishop of Culm, who in the name of the King of Poland had supreme ecclesiastical authority in the Grosse Werder, had permitted the overgrown Mennonite Grosses Werder congregation to erect four meetinghouses, whereas up to this time the Flemish Mennonites had only the church built in Rosenort in 1754. The new buildings were begun in Tiegenhagen, Ladekopp, Fürstenwerder, and Heubuden, on the condition that the Mennonites build and perpetually maintain a Catholic chapel on Möskenberg at Petershagen. The buildings were progressing well, when in the summer of 1768 the bishop suddenly forbade and forcibly prohibited their completion. The reason was this: Anna Steffen, the only daughter of Jakob Steffen, a Mennonite resident of Tiegenhagen, was with her own consent abducted by Catholic nuns with aid of the Tiegenhagen priest, taken to Culm, and married to a Pole. Since the girl was still a minor, the parents demanded her surrender, and finding no hearing from the bishop they appealed to the King of Prussia, who had control of the Elbing region as a special right from Poland. The king ordered the bishop to release the girl; but now the bishop visited his wrath on all the Mennonites of the Grossen Werder, by prohibiting the completion of the four buildings, and declared that he would not consent to having them finished until they stopped bothering him about Steffen. At the end of October he gave his consent and the buildings were finished. The Catholic chapel in Petershagen, which was finished at the same time, was burned down by lightning in 1778 and was not rebuilt. The Mennonites terminated their obligation by paying a lump sum.

In 1853 Claas Epp, the Schulze of Fürstenwerder, immigrated to the province of Samara (Am Trakt settlement), followed in 1859 and the following years by the preacher Cornelius Classen and finally also Elder Johann Wiebe to the Alt-Samara settlement in the same province.

In 1990 the former church building was destroyed by fire.