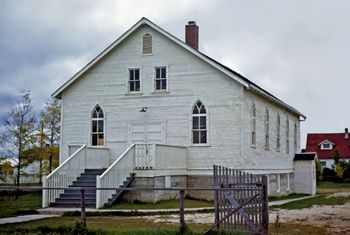 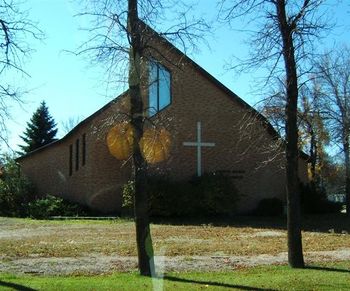 In the mid-1920s, Mennonite Brethren families who had recently immigrated to Canada from the Soviet Union settled on farms around Niverville, Manitoba. Church services originally were held in the Niverville United Church. However, because their farms were scattered over such a large area, transportation presented a serious problem. Some of the families began meeting in homes to fellowship around God’s Word. After a short time they discovered that a small Lutheran church, which was centrally located, was being used only one Sunday a month. This congregation was willing to share their facilities for the other three Sundays a month. The Niverville Mennonite Brethren Church began services in this Lutheran Church on 29 May 1929 and formally organized on 8 October 1933. The group initially consisted of 18 members. Abram J. Janzen and John M. Friesen are considered the founding leaders of the group.

These early members were a collection of immigrants whose lives had been disrupted by revolution. Their families, their churches, their farms, their businesses, and their occupations, had been decimated. Many came to the Niverville area with nothing more than the travel expenses they had incurred and their faith in God. Because of the Bible teaching and the emphasis on the importance of fellowship that they had received since early childhood, they were able to establish a church very quickly. The early growth of this small congregation was prolific. In 1930 membership increased to 27. With the baptism of 23 believers in 1931 membership grew to 50.

The time came when the Lutheran Church was no longer large enough to meet the needs of a growing congregation, and consideration was given to constructing their own building. Discussions focused on whether to build the church in the country, which would be more central to the majority of the members, or in the village, where those without transportation could be accommodated. In 1937 the issue of where to build was determined when one of the members sold his car, bought the present site, and donated the land to the church.

In the early years, leadership was given by both ordained ministers and lay people called from within the church. The church had the wisdom to seek and welcome into its fellowship some of the local public school teachers to assist in the pulpit ministry. In 1974 the church called its first full time pastor. It was the first time that one person could focus his full attention to the work of the church. The church in its wisdom continued to blend its leadership and pulpit ministry with professional ministers and lay people.

Music has always been an integral part of Fourth Avenue Bible Church. The many choirs and music groups that have existed throughout the years have been an avenue for people to express their faith and relate to each other. There have been a number of people in the history of this church who have been gifted by God in the area of music and have gone on to use it for the glory of God.

The language of worship is English; the transition from German occurred in the 1970s-1980s. A separate German worship service was held until September 1988 when this was replaced by a German Sunday school class.

The congregation was known as the Niverville Mennonite Brethren Church until 2001, when it changed its name to Fourth Avenue Bible Church.

The congregation celebrated its 80th anniversary on 2 May 2010.

Toews, John A. A History of the Mennonite Brethren Church: Pilgrims and Pioneers. Fresno, CA, 1975: 162. Available in full electronic text at: https://archive.org/details/AHistoryOfTheMennoniteBrethrenChurch.