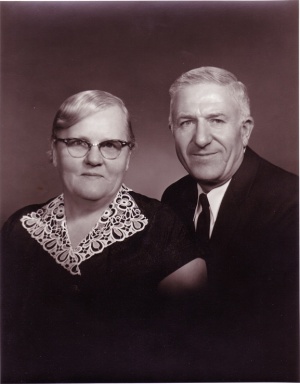 Nicholas Fransen: churchman and farmer; born 5 September 1907 in Mariawohl, Molotschna Colony, Ukraine to Nicholai and Maria (Wichert) Fransen. Nicholas was the second child in a family of three sons and five daughters. He was baptized 1 June 1925 by Ältester David Nickel and became a member of the Rudnerweide Church. In 1928 he married Tina Klassen. They had two daughters and five sons. Following the death of his first wife Tina in 1970 he married Tina Martens who died in 1995. Nicholas died 12 November 2000 in Vineland, Ontario.

In 1926 Nicholas Fransen moved to Canada with his mother and siblings. They made Vineland, Ontario their home. It was at the Vineland United Mennonite church that he met Tina Klassen. At first he worked as a day laborer in Kitchener and Vineland. In 1933 they bought a small acreage at Jordan Harbour and added a second more productive farm near St. Catherines in 1947.

When he was 22 years old, the Vineland United Mennonite Church elected Nicholas to be one of its ministers. Five years later, in 1934, he was ordained there by Ältester D. H. Koop. From this point on his life included: being a husband and father of a growing family, farming, which he loved, and church and conference involvement which gave him much satisfaction.

In his church involvements Nicholas served at various times in different capacities in the conferences. Twice he was moderator of the Conference of United Mennonite Churches of Ontario. He was a founding board member of the United Mennonite Educational Institute. He also served on different committees in the Conference of Mennonites in Canada. The committee on which he served longest was the board of the Canadian Mennonite Bible College where he was also a member of the first board. For several years he spent the winter months visiting constituency churches in Canada, promoting the college and soliciting funds for the on-going program of the college. Nicholas also attended a number of sessions of the General Conference Mennonite Church and served on different committees of the conference. Following his retirement from farming Nicholas spent two years with his second wife as a worker in Mexico under the auspices of the General Conference Mennonite Church.

Nicholas was a strong member and promoter of faith in Jesus Christ and also of the projects of his denomination as well as of the Mennonite people as a whole. He firmly believed that young people should have opportunities to be educated in the Christian faith. His faith extended to a strong belief in the confession as enunciated by the Mennonite Church. On the other hand, Nicholas was also interested in the welfare of the Mennonite people and spent several terms as a member of the Canadian Mennonite Board of Colonization. He is remembered for his "down to earth" sermons. Nicholas was often invited to speak in churches away from his home.

Nicholas died in Vineland after a long life, with the assurance that Jesus Christ was his only hope.