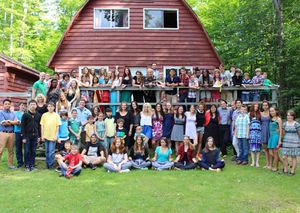 Fraser Lake Camp was born in 1955 from the vision of three Mennonite pastors in Toronto, Ontario, Canada. Emerson McDowell, John H. Hess and Glen Brubacher wanted to provide rural camping experience for urban children, something they had done a few years earlier at the Chesley Lake Camp. They wanted a more primitive camping experience than Chesley Lake provided, and so made arrangements with Elvon Burkholder, a worker for the Mennonite Mission Board of Ontario, to use his farm on Fraser Lake in the Bancroft, Ontario, area.

The summer of 1955 saw one week of camp for 23 boys and one week for 30 girls in tents pitched in the Burkholder farmyard. Meals were prepared from the summer kitchen behind the house. In 1956 a dining hall-kitchen was built on the farm's lakefront. Soon the program grew to a full eight weeks each summer. By 1966 several additional buildings had been constructed, including a health center, craft shop, tuck shop, and almost a dozen cabins. A separate dining hall was built in the mid-1960s, and the original building became a larger kitchen. A new dining hall structure was built in 1988. Most of the original buildings were renovated or replaced during the 1980s.

In 1960 Fraser Lake started a second camp, Frontier Forest Camp, designed for use by troubled inner city youth. This camp closed in 1970 because of difficulty in finding qualified staff.

Fraser Lake Camp did well until the 1990s when it faltered because of a sagging economy and difficulty in staff structures. By 1997 it was near financial collapse. It was preserved through a merger with Willowgrove Farm, a 1960s initiative by Emerson McDowell that established a successful day camp (Glenbrook) in the Stouffville, Ontario area. The former board of the Fraser Lake Camp became the program committee for Fraser Lake Camp under the oversight of the Willowgrove board. The formal amalgamation took place in 1999.

Since 1999 Fraser Lake Camp has continued to operate on a 270 acre site as part of the Willowgrove organization. Fraser Lake has never formally been owned by a Mennonite conference. It was owned by the Fraser Lake Camp Association until 1999, and was run by an independent board. In 2017 it had facilities to accommodate 180 persons, and operated programs from early spring through the fall.