From GAMEO
Revision as of 07:32, 30 October 2017 by RichardThiessen (talk | contribs) (Updated membership table.)
(diff) ← Older revision | Latest revision (diff) | Newer revision → (diff)
Jump to navigation Jump to search
A checked version of this page, approved on 30 October 2017, was based on this revision. 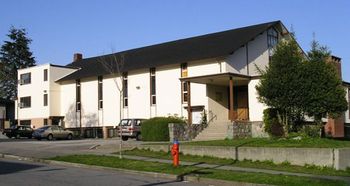 David Vogt and John Neufeld were elected as the congregation's first leaders. Soon, Peter R. Toews was called as the first pastor of the church in 1955.

Discussions with Vancouver MB Church regarding the construction of a much-needed new building did not bring about the intended results, so Fraserview decided to organize a new congregation, Killarney Park Mennonite Brethren Church, and built the latter's sanctuary in 1961 in order to accommodate Fraserview's overflow.  In 1960, still in need of space, Fraserview expanded its facilities with subsequent renovations occurring in 1967-1968.  Membership continued to increase, and some families left to form Richmond Bethel Mennonite Brethren Church in 1971.

In 1977 construction began on a new sanctuary in Richmond, south of the Fraser River, with the completed structure dedicated in May 1979.