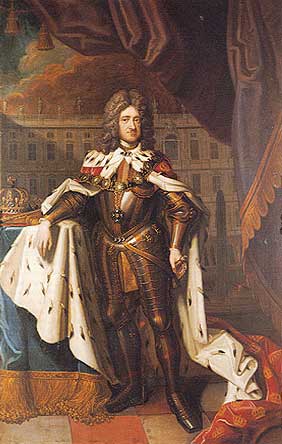 Friedrich I (Frederick), King in Prussia (König in Preußen), 1701-1713, was born 11 July 1657, the third son of Elector Friedrich Wilhelm of Brandenburg (1620-1688), a staunch Calvinist, and Luise Henriette of Orange-Nassau (1627-1667). Friedrich became Friedrich III, Elector of Brandenburg and Duke of Prussia in 1688 on his father’s death, and convinced the Holy Roman Emperor that Prussia could be ruled as a kingdom in 1701.

In 1688 he took the side of the Mennonites in the matter of admitting the severely persecuted Swiss Mennonites. Friedrich offered these exiles refuge in his East Prussian realm, especially in the Lithuanian marshes near Tilsit, with a promise of complete freedom from military service and toleration of their principles. He co-operated fully with the Dutch government, which was also deeply interested in these victims of persecution.

On 3 May 1710, Friedrich instructed his ambassador in Bern to work for greater toleration of the Mennonites. If this should not be agreeable to the canton, he was determined to "establish them in his realm." He also communicated with the Mennonite churches in The Hague, Amsterdam, and Hamburg-Altona, which were also in active sympathy with the oppressed Swiss.

On 26 September 1710, the Swiss government granted the following concessions: (1) The Mennonites were to be permitted to withdraw without hindrance and to dispose of their property upon payment of a 10 per cent emigration fee and with loss of citizenship (the provision also contained a threat of the execution by sword of any who returned). (2) Bern would expedite them to its border at its own expense and feed and lodge the poor as far as Frankfurt. (3) A delegation to the king was not feasible. Only after all the Mennonites had left the country would they be permitted to deal with the king.

With the aid of the Mennonites of Amsterdam, Hamburg, and Danzig, a number of the exiles were settled in Lithuania. The king naturally expected a larger number of settlers than actually came, for he had personally secured for all the refugees the necessary passes through the intervening countries. However, most of the exiles went to Holland, and a few families went to Pennsylvania.

The Mennonites who settled in Lithuania in 1711, after three delegates had previously looked over the land and found it very fertile, were received there by General von Dönhof and by the Königsberg legal councilor von Reuter in the name of the king. These men were commissioned to promote the settlement in every way possible.

From Polish territory, especially around Elbing and Culm, the king drew a number of Mennonite families to Lithuania with the guarantee of complete military freedom. However, he died before the negotiations were completed on 25 February 1713, and was succeeded by his son Friedrich Wilhelm I.