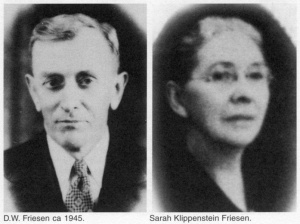 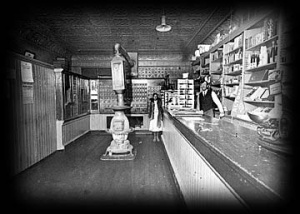 D.W. Friesen moved to Lichtfeld, west of Altona MB, in the mid-1890s with his step-parents, Anna Klassen and Cornelius Bergman. He attended school until the age of fourteen. He farmed west of Altona from 1901 to 1903, then taught in the Mennonite West Reserve village of Gnadenfeld for two years. In 1905 he moved to Altona and started an implement dealership, but soon left this business. He bought a confectionery store and was made postmaster in Altona in 1907. From 1910 to 1946, he was also an agent for Manitoba Government Telephones. Retail book sales were added in 1923, and a print shop and wholesale stationery supply in 1930. This business expanded to become one of Canada’s largest printing companies, D.W. Friesen & Sons. D.W. sold the company in 1948 to three of his sons, David, Ted and Ray, and quit as postmaster in 1949.

D.W. Friesen & Sons began publishing a weekly newspaper, the Red River Valley Echo, in 1941. The first English-language Mennonite newspaper in Canada, The Canadian Mennonite, was also a Friesen publication. Other significant Mennonite publications were In Search of Utopia by E.K. Francis and, together with the Mennonite Historical Society, Paul J. Schaefer’s four volume series Woher? Wohin? Mennoniten! The company was renamed Friesens Corporation in 1995. Now employee-held rather than family-owned, Friesens Corporation has more than 600 employees.

Besides his many business responsibilities, D.W. was active in the church. He was baptized into the Rudnerweide Sommerfeld Mennonite Church on 5 June 1900. He joined the Altona Bergthaler Mennonite Church in 1907, was elected a deacon in 1912 and ordained as such in 1914. He served in this capacity until 1949. As deacon, he was one of two administrators of the Armenkasse (treasury for the poor) and also managed the Wohltaetigkeitskomitee (welfare committee).

The Armenkasse consisted of levies on property and donations of money, grain, clothing and food.  The Bergthaler Armenkasse was administered by deacons until the 1950s, and then taken over by church and conference service committees.  It differed from the Waisenamt (see entry for mutual aid) in that the latter administered the inheritances of orphans, cared for widows, and served as a banking institution.

D.W. Friesen was elected in 1929 to the committee that created the constitution of the Bergthaler Mennonite Church. He served as treasurer of the Manitoba Mennonite Insurance Organization (later renamed the Red River Valley Mutual Insurance Company) from 1922 to 1949, and was Canadian treasurer for the Foreign Mission Board of the General Conference Mennonite Church from 1939 to 1950. Largely a self-taught man, D.W. collected a large library of works of Mennonite history, literature and theology. His interest in these subjects led him to assist in the founding of the Mennonite Historical Society. Family and employees described D.W. as a quiet, pious individual. “We always knew our father to be a man of simple tastes and plain lifestyle. That was attested by the fact that one day a week he fasted and that, rigorously, for the rest of his life.” (Ted Friesen)