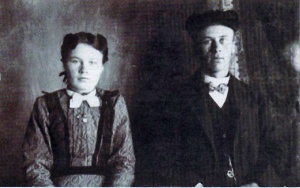 Johann E. Funk was a pioneer photographer who lived in the village of Schönwiese on the Mennonite East Reserve in Manitoba. He was born on 26 January 1878, just four years after his parents, Peter (1841-1922) and Elizabeth Derksen (1846-1925) Funk had immigrated to Canada from South Russia. Johann was the fifth of seven children -- one sister having died in infancy.

As a young man, Johann developed an interest in photography and appears to have been active in this activity from the late 1890s until approximately 1904. In 1903 Johann married his first wife, Barbara Wiebe (1884-1907). Barbara died of tuberculosis in 1907 leaving him with a daughter. Later that same year he married Helena Klippenstein (1886- ). Together they had nine more children.

In addition to farming, Johann enjoyed rebuilding cars. Some time during the 1920s he lost an eye when some metal chips flew into his face. In 1912 he set up a co-op telephone exchange in the Chortitz area. In 1948 Johann sold the farm and moved to Steinbach. He died there at the age of 90 in 1968.

Of all his many accomplishments, Johann E. Funk will be remembered most for his photographic work which has become a unique and historically significant record of pioneer life on the Mennonite East Reserve of Manitoba, Canada. Approximately 40 of his glass plate negatives still existed in 1995 -- ones that he did not recycle as windows in his chicken coop.