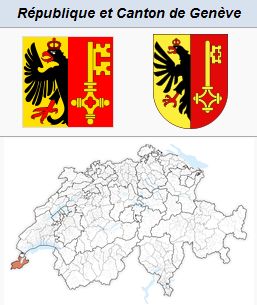 In 1532 two foreign Anabaptists, tortured at Basel, revealed that the Anabaptists were increasing in number along Lake Geneva; but they were uncertain whether there were any Anabaptists in the city at this time.

In February 1537 two Dutch Anabaptists Herman de Gerbihan and Andry (Andre) Benoit of Engelen in Brabant came to Geneva. They spread their principles, and on 9 May appeared before the Council of Two Hundred and declared their intention to hold a disputation with the reformers. Farel and Calvin, who had already been attacked by many Genevans, took advantage of this opportunity to oppose these foreign adversaries. The council requested them to present their proposals in writing, and when this was done, it decided that the newcomers receive a hearing before the council; for the credulity of the people made it dangerous to hold a public disputation. On 14 May the principles of faith were read aloud; Farel demanded a public discussion, but the councilors objected, saying, "We know well that you will be the victors, but you may be sure the populace will hear the errors of the Anabaptists more greedily than your truths: to proclaim the untruth to the people is sufficient to create a taste for it." Calvin replied, "You are quite right. But if we now refuse the disputation the Anabaptists will boast that we are defeated and do not dare to defend our faith. Of the two evils it is better to choose the lesser." The council finally consented to grant this request of the reformers and also the Anabaptists. The public disputation began 16 May 1537 in the monastery of Riva (de rive) and lasted two days. Without doubt it dealt principally with the question of baptism, the Anabaptists insisting that disciples of Christ may be baptized only when they are capable of giving an account of their faith.

The rug dealers and other persons of rank who made up the council and who believed that they possessed all the knowledge needed to distinguish between doctrines, apparently did not favor this public disputation. On 18 May they met and decided that the disputation would lead to strife rather than to unity and would more likely cause faith to waver than strengthen it; it must therefore be discontinued. These persons should be ordered to leave the city and its canton. All notes taken during the disputation were to be turned in to the city hall and destroyed, lest any of them appear in print. The Anabaptists should no longer be called brethren, because they were not in harmony witli the church and were unwilling to worship with its adherents.

The council summoned the two Anabaptists and told them it would be glad to give them a hearing, for it gave everyone a hearing; but because their doctrines were not founded on the Scriptures they must be declared false. It asked them if they were ready to recant, return to God and beg His forgiveness. The Anabaptists replied that thev would in no case recant. On 19 May they were again summoned and questioned. They answered that their conscience did not permit them to take any other position; they were then ordered to leave the city permanently. They betook themselves to the canton of Bern.

On 30 May Johannes Bomeromenus, a printer, and Jean Tordeur (Stordeur), both from Liege, who had declared themselves willing to die in defense of the doctrine that infants should not be baptized, were expelled from the canton.

On 7 September Farel and Calvin notified the authorities of several citizens who persisted in holding Anabaptist ideas. The council decided to prosecute them. On 11 September a dealer in caps, named Guider, who was suspected of Anabaptist ideas, recanted.

Jacob de Lesture, suspected of Anabaptism, refused to appear before the council, and was banished. This sentence was opposed by Georges de Lesclef, Jean Philippe, and the councilor Lullin. On 28 September, Jane, a glover, was expelled from the city for life because she persisted in her Anabaptist faith; but on 7 June 1538, after the banishment of Farel and Calvin, the council permitted her to return if she would obey the laws.

In spite of persecutions a considerable number of citizens went over to the Anabaptists: Jean Japin, called Cologny, a citizen of Geneva, one of the originators of the Reformation, made a public statement in favor of the Anabaptists, and was consequently sentenced to a year in prison on bread and water so that he would no longer trouble the preachers.

Two of the declared adherents of Anabaptist doctrine were Jacob de Meraulx and Jean Moynier. Their secret fellow believers were probably numerous, for on 8 October 1537 the council expressly ordered the preachers not actually to refuse the sacraments to the Anabaptists, and to let simple admonition suffice. On 14 January 1538 Farel lamented the victory of several Anabaptists.

The theological discussions with the Anabaptists, by opening people's eyes, produced a ferment among them. Farel and Calvin, feeling themselves deserted by a portion of public opinion, and wishing to execute a great coup, had all the inhabitants subscribe to an orthodox confession of faith in order to separate the sheep from the wolves. But the populace distrusted these measures; and hostile magistrates were appointed, who opposed Farel and Calvin. The conflict grew so serious that the council decided to expel Farel and Calvin. The latter retired to Strasbourg, where he married Idelette de Bure (van Buren), the widow of a Dutch Mennonite, and where he lived until 1541. In the meantime public sentiment in Geneva had changed; friends of Calvin had again come into power and recalled him to organize and lead the new church. Calvin returned as a victor and gave the Genevans a new constitution. By means of these regulations the church attained supreme authority and Calvin was its undisputed head until his death in 1564.

Under the scepter of the all-powerful Calvin, who had Michael Servetus killed at the stake in 1553, and who sternly suppressed any attempt to cause a division in the church, there was obviously no room in Geneva for Anabaptists.

Like Luther and Zwingli, Calvin also attacked the Anabaptists. In one of his works, Bréves instructions pour armer tous bons fidéles contre la secte commune des anabaptistes, dedicated to the preachers in the county of Neuchâtel, he declared, "To write against all the false opinions and errors of the Anabaptists would be so long a story, almost a hell, from which one could not emerge,—for this vermin is different from all other people in that it not only errs in certain points, but has also caused a sea of nonsensical talk." Here are a few additional specimens of Calvin's opinion of the Anabaptists: "They conclude that all use of arms is of the devil. . . . It is certain that it is the intention of these wretched fanatics to condemn all fortifications, munitions, and all bearing of arms. . . . But the Christian not only does not offend God in seizing a weapon, but really has a divine calling to do so, which cannot be refused without blasphemy.— A man who had only an ounce of brain, would he talk like the Anabaptists?—It is easy to see that these unfortunate fanatics will attain no other end than to reduce everything to turmoil, set up community of goods, in spite of the fact that they fully and completely deny it.—Or they will not be content until they have persuaded all rulers to resign, in order to step into their positions and establish themselves there as in an unowned possession.— These unfortunate persons spit out many of the most irrational blasphemies: the government of the councillors is according to the flesh, they say; that of the Christians according to the Spirit.—As concerns the faith which they claim to have, I want to say that they make of themselves enemies of God and of the human race.—These poor insane people accept as revelations from heaven all the fables they have heard their grandmothers tell.—If the animals could speak, they would talk more sensibly than they. These crazy persons want to take the Lord with them in order to have Him quickly defend their idle talk. Their basis for a change in this command (concerning Jesus' teaching on the oath) is an obvious blasphemy; for it would follow from it that Jesus Christ had rescinded that which had been established by God, His Father, which can surely not be tolerated."

He expresses himself similarly in the Traité contre les anabaptistes. But the above citations are sufficient to characterize the work in which Calvin attempts to refute the chief Anabaptist doctrines, such as baptism, oath, discipline, communion, relation to government, the bearing of arms, and the nature of the soul. Theodore von Beza asserted that Calvin was completely victorious in this matter. The reading of these lengthy pages has not made the same impression on us.

It seems that since Calvin's time there has not been a Mennonite church in Geneva. At any rate no trace of any has been found. Not until World War I was there a small contact between Geneva and the Mennonites. In 1912 a French Mennonite, Pierre Kennel, who was the descendant of Bernese Brethren who were expelled at the end of the 18th century and fled to France, settled in Geneva to enter upon his vocation as a university teacher. As professor at the university he lectured on biology. Then came the war. Proud of being true to his Christian conviction, his social concepts and the inherited traditions, he refused to obey the French mobilization orders. . . . Thereupon on 7 May 1915 the city council and the university demanded that he withdraw from his academic work.

In 1926 about 20 Mennonites were living in Geneva and its vicinity, but without forming an organized congregation. Their names were Geiser, Kennel, Wenger, and Wüttrich.