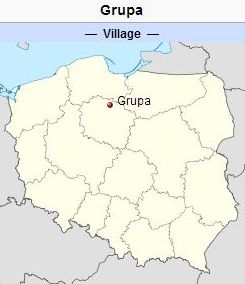 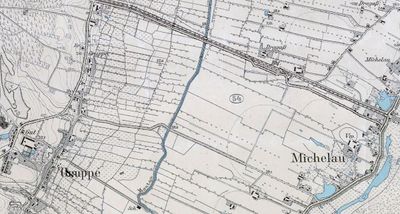 Gruppe (now Grupa; coordinates: 53.50478, 18.62588 [53° 30' 17.2" N, 18° 37' 33.2" E], population in 1905, 476, in 2012, 541), is a village in Poland that lies approximately 7 kilometres (4 miles) west of Dragacz, 17 km (11 miles) north-east of Świecie (Schwetz), 53 km (33 miles) north of Toruń, and 61 km (38 mi) north-east of Bydgoszcz. A section of the Montau-Gruppe congregation in Poland, in the Schwetz-Neuenburg swamp along the Vistula River near Culm, it was founded in 1568 by Dutch emigrants. Old documents show that the Polish kings confirmed the lease contract concluded between Hans Dulsky, the heir of Lubochyn, and the Mennonites. The contract was renewed every 50 years, but each time the rental fee was increased; this is evidence that under the skilled hands of the Mennonites the soil increased in value. The church was built at Montau in 1586, and was for 200 years shared by Montau and Gruppe. In this period there are records of visits by preachers from Lithuania, Danzig, Altona, and Harlingen. The congregation belonged to the Frisian branch.

The origin of the separate congregation of Gruppe goes back to the erection of a second church in 1776, built in Ober-Gruppe (rebuilt 1865), which was needed because of the great distances within the settlement. From that time on there were two branches, Montau and Gruppe, in the congregation. This was clearly expressed when in 1856 the Montau church was to be completely rebuilt because of flood damages, and the Gruppe party refused to share the cost. On the other hand, five years later Montau refused to aid Gruppe in the rebuilding of their church. Only the efforts of Elder Peter Bartel prevented a schism. On 7 October 1866, the new church in Gruppe was dedicated. The costs of the building amounted to 6,756 talers.

A second dispute arose from difference in attitude toward the new military law of 9 November 1867, which resulted in a complete break between the two groups. The Montau branch opposed Bartel in three respects: (1) he added acceptance of the military order to the baptismal formula; (2) he required them to add their signature to a regulation expelling those who did not agree with his position; and (3) he changed the place of baptismal instruction from Montau to Gruppe.

But the schism was no sooner formed than an attempt was made to heal the breach. It was begun about 1900 under Bartel's successor Görtz; the church moderated its position on the military law and also granted the admission of new members. And in 1895, when a new confession of faith was drawn up for all the West Prussian churches, Gruppe also accepted it. The formal unification was planned for the winter of 1913, but it was postponed by the war until 1921. After then the two groups formed a single congregation as they had formerly.

In 1897 Gruppe acquired a new church, and in 1899 a home for the poor; in 1899 an organ was also installed in the church. However, the membership steadily declined, partly because of the events described above, and partly by members moving into the city of Graudenz. Because of the boundaries set by the Treaty of Versailles in 1918, 75 members of Gruppe either emigrated or were cut off from the congregation. In 1927 Montau-Gruppe had a baptized membership of about 550 (see Montau), in 1940, 400. Bernhard  Kopper was the last elder, 1934—   .