From GAMEO
Revision as of 02:03, 9 March 2019 by AlfRedekopp (talk | contribs) (→‎Bibliography)
(diff) ← Older revision | Latest revision (diff) | Newer revision → (diff)
Jump to navigation Jump to search
A checked version of this page, approved on 9 March 2019, was based on this revision. 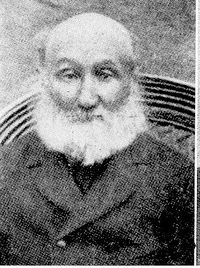 Heinrich Klaas Hübert: first elder of the Mennonite Brethren Church; born 26 November 1810 to Klaas and Maria (Thiessen) Hübert in Münsterberg, Molotschna Mennonite Settlement, south Russia. He was the second of ten children from his father’s first marriage but one of 25 children in the family. In about 1832, he married Agatha Loewen, with whom he had one daughter. After her death, he married Katharina Schmidt, with whom he had two children. His second wife died in the early 1860s, and shortly before February 1865, he married Maria Epp, daughter of Jakob Epp. In 1860, Heinrich was elected as the first elder of the Mennonite Brethren Church, and other than a period of several years in the 1860s, he continued in this work until frail health forced him to resign. He died on 16 December 1895 in the Kuban Mennonite Settlement, with the funeral being held on 21 December at the Wohldemfürst church.

As a child, Heinrich likely attended the village school in Münsterberg before going to the Zentralschule in Orloff. His first teacher was Tobias Voth, whom Heinrich later credited with instilling strong Christian values in his students, as well as with a love of learning and culture. Heinrich was baptized and joined the Orloff Mennonite Church. In about 1832, he married Agatha Loewen, with whom he had one daughter. After Agatha’s death, Heinrich married Katharina Schmidt, with whom he had a daughter and a son, both of whom survived childhood. His third wife was Maria Epp, who survived her husband by five years.

After his first marriage, Heinrich and his wife lived on his parents’ farm in Münsterberg until Heinrich was able to buy a farm in Liebenau, where he also owned and operated a treadmill, as well as serving on the village council and working as the reeve for several years. In 1857, he and several other merchants and leaders from the community founded a private secondary school in Gnadenfeld, designed to further education and religious life in the community.

When revival meetings led to the formation of the Mennonite Brethren Church in 1860, Heinrich Hübert joined and was appointed leading minister of the group on 30 May 1860. He was rebaptized by immersion in May 1861 and began to baptize others, as well as officiating at weddings and other functions. He also negotiated with elders from the Molotschna Mennonite Settlement and with the government for recognition of the new denomination.

Meanwhile, Hübert’s business began to fail, possibly because of his association with the Mennonite Brethren Church, and he was forced to sell his treadmill and farmstead in Liebenau in March 1861. In early 1865, he was falsely accused of baptizing a Russian girl, imprisoned by the Russian government, and held in isolation until November of that year.

One of the challenges Heinrich faced in the church was conflict with the Fröhliche Richtung movement, which stressed the emotional aspect of faith. Partly because of this conflict, Heinrich was dismissed from his position as minister but was reinstated while he was still in prison. He moved to the Kuban Mennonite Settlement in 1873, where he continued to serve as an elder of the church until failing health caused him to resign in 1877, although he still remained active in the church. He died on 16 December 1895 at the age of 85.

Heinrich Klaas Hübert was a dedicated minister and church leader who devoted himself to the church despite the many difficulties he encountered. Through his life and work, he helped strengthen the Mennonite Brethren Church and provided an example of faith and commitment for the people around him.

Heinrich Hübert, the first elder of the Mennonite Brethren (MB) Church, was born in Münsterberg, one of the newer villages of the Molotschna settlement in southern Russia. From here he moved to Liebenau, where he became the manager and owner of a treadmill, and served as presiding officer of the village council for a number of years. In 1861 he sold his business interests at Liebenau largely because of the pressure of his creditors, no doubt due to his affiliation with the newly organized Mennonite Brethren Church. Later on he changed his residence to Blumenort, and from there moved to the new Kuban settlement in 1873.

Hübert received his education in the Zentralschule of Ohrloff under Tobias Voth, who inspired in Hübert a love for music, poetry, and nature study. Hübert was a habitual reader of the new books from the circulating library sponsored by Voth, and was inspired by the writings of men like Hofacker, Krummacher, and Spurgeon. In his home congregation, the Ohrloff Mennonite Church, he was held in high esteem until he became a signatory of the Ausgangs-Schrift of the newly formed MB Church on 6 January 1860. Hübert's part in the first struggles of this new movement is not exactly known, but his name is affixed to such documents as the Ausgangs-Schrift, addressed to the Mennonite elders of the Molotschna; the explanation of the Brethren written to the leaders of the churches of Ohrloff and Halbstadt on 19 March I860, in which they replied to the charges that the new group was interpreting the Bible one-sidedly, and respected no existing church organization; the explanation to the Fürsorgekomitee; and the inquiry directed to the Mennonite elders of the Molotschna on 1 January 1861, requesting permission to move away from the Molotschna settlement.

30 May 1860 was designated by the new church for the election of ministers in the home of Jakob Reimer, where 27 members cast their votes, 24 for Heinrich Hübert as the first preacher of the MB Church. Hands were laid on Hübert by the oldest brother of the group, Franz Klaassen, of Elisabethtal. He was ordained elder in 1868 in the home of Cornelius Neufeld in Neukirch by Johann Fast of Rückenau.

Movements of a highly emotional nature (die Fröhlichen), which threatened to make inroads upon this new group, were firmly restrained and in 1862 officially condemned by Heinrich Hübert and his assistant, Jakob Becker.

When Hübert was imprisoned at Tokma by the Russian government on a false charge that he had baptized a Russian, the emotional forces gained control and dismissed Hübert from his office. His case was reviewed, however, in 1865, and repentance on the part of those responsible for ousting Hübert opened the door for his reinstatement. The group, not knowing what to do, cast lots which turned in favor of Hübert's reinstatement. When released from prison he resumed his duties until he immigrated to the Kuban settlement, after having ordained Abraham Schellenberg, the elder of the MB Church in the Molotschna. In the Kuban area he was leader of the MB Church until May 1877, when he ordained Daniel Fast as his successor and retired because his health had been seriously impaired during the ten months of imprisonment. In 1895, at the age of 85, he died.

Hübert is said to have been the deepest thinker in the Brethren group of that time, and, although he was handicapped in his public ministry because of a weak voice, his sincere faith more than compensated for this deficiency and succeeded in inspiring faith and Christian living in the newly formed MB Church. -- Jacob J. Toews, Mennonite Encyclopedia, vol. 2, p. 825.