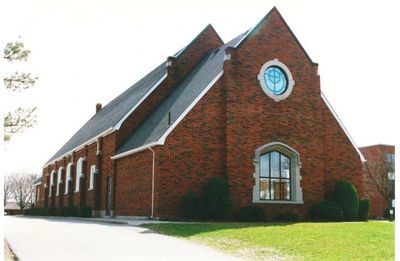 The Preston, Ontario area (now part of the city of Cambridge) was the oldest Mennonite community in the Waterloo Region, tracing its origin to the first Caucasian settlers to arrive in this part of Ontario. In 1800 four family groups immigrated here from Pennsylvania and included an ordained deacon, Jacob Bechtel. Joseph Bechtel arrived in 1802 and was ordained as the first minister in 1804. This group of Anabaptists met in homes or barns until 1814 when they built a union or free house meetinghouse. Religious groups other than the Church of England were not allowed to build places of worship in Upper Canada until 1828 or later, thus before this time community meetinghouses were available to everyone. Because of disagreements in the early 1820's, the Anabaptists were locked out of this building by another church group using the same facility. In 1824 the Bechtel group relocated and built a new union meetinghouse. It was known as the Bechtel Appointment because of the surnames of its leadership. In 1842 this group became formally organized when a red brick meetinghouse was built just up the road beside the already established cemetery. By 1848 this congregation became known as Hageys, since two of its spiritual leaders were Jacob and Joseph Hagey.

In 1840 the first Mennonite Sunday School in North America was organized at Hagey Mennonite, but it closed after a few years due to conservative opposition. In 1891 a permanent Sunday School was organized and classes were taught in German and English. The first English sermon was preached at Hageys in 1890 and German was not used after the 1890's.

The Hagey church was extensively renovated in 1896, and after a fire in 1950. In 1954, after a second disastrous fire, a new church was built at the present location and it was renamed Preston Mennonite Church. The congregation joined the Mennonite Conference of Eastern Canada in 1988, and in 1995 it also became part of the Conference of Mennonites in Canada.

The Preston congregation has been active in local outreach for many years. In 1943 its members were instrumental in opening Braeside Home, a senior's residence, which was described as the first of its kind in Canada and the fourth in North America. This institution relocated next door to Preston Mennonite Church in 1956 and was renamed Fairview Mennonite Home. Residents are able to attend functions at Preston Church or listen to worship services over a public address system. Many of the church members have been employed there, and many of the church's seniors reside there.

The Preston congregation has experienced four name changes and four site changes. In 2000 it celebrated 200 years as a faithful Mennonite presence in this community.

Church archival records in Mennonite Archives of Ontario. Other records, documents and artifacts are maintained in the offices at Preston Mennonite Church.

Preston (Ontario) Mennonite Church (Mennonite Church), a member of the Ontario Conference, was from 1842 to 1953 known as the Hagey church because of the Hagey families in the congregation and because it was located at Hagey's crossing about one mile north-west of Preston. The meetinghouse, erected in 1842, was destroyed by fire in 1950; its successor was likewise destroyed by fire in 1953. The present brick meetinghouse at 791 Concession Road was dedicated 16 May 1954. In 1957 the membership was 119, with Howard Good as minister.

Although the Preston area settlement was the oldest in Waterloo County, the history of the Hagey congregation before 1842 is obscure. The congregation must have met in the homes of the members for some time, since the first meetinghouse in the county, at Kitchener, was erected in 1813. There is some evidence that a meetinghouse was erected near Preston about the same time. The Wanner congregation (first meetinghouse 1829) has always been closely related to Hagey, and apparently for a long time the ministers served both the Hagey and Wanner congregations. For a time the Weber (Strasburg) church was included in the circuit. This area has for the past 70 years been progressive in outlook and activities.