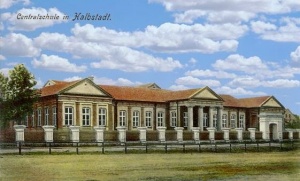 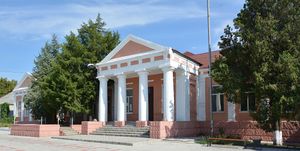 Halbstadt Zentralschule, Molotschna, Russia, found­ed in 1835, was the second Mennonite secondary school in Russia. The initiative for the founding of the school was given by Faddeyev of the De­partment for Foreign Settlers to train teachers, secretaries, and to promote the Russian language among the Mennonites. Orphans and children of poor parents received free training, for which they were obligated to serve the community for pay for a number of years. At first the school was de­pendent on the Oberschulze of the district and the level of education was rather low (1835-70). Among the teachers of this period were Johann Neufeld, Abraham Ediger I, Johann Voth, Peter J. Neufeld, Jacob Wiebe, and Gustav Rempel. Some of the outstanding graduates during this time were Daniel Fast, Johann Claassen, and Bernhard Harder.

In 1869 the school became subject to the newly organized Molotschna school board (Molotschnaer Mennoniten Schulrat). Before this time the school offered a two-class course consisting of four years. Now two years were added. The graduates re­ceived a certificate. The standard of education was raised considerably. In 1878 a two-year teachers' training course was added. The Neu-Halbstadt elementary school became the "model school" (Musterschule) in which the students did their practice teaching beginning in 1879-80. The two basic classes (Grundklassen) of the Zentralschule, consisting of two years each, were changed into three-class courses, each consisting of a year (1884-85). Some of the outstanding teachers before World War I were Kornelius Unruh, Peter J. Neu­feld, Peter M. Friesen, Heinrich Franz II, Hermann A. Lenzmann, P. A. Ediger, D. H. Hamm, W. P. Neufeld, P. P. Fast, Kornelius Bergmann, D. J. Klassen, Hermann Penner, Abraham Klassen, Abraham Töws, and Peter J. Braun.

In the beginning Russian had been taught as a foreign language. Around 1890 all subjects except the German course and Bible were taught in Russian. After the Russian Revolution (1917) all subjects with the exception of the Russian and the Ukrainian languages and literature were taught in German. In 1921 the Teachers' Training Institute was perfected and became known as the Molotschnaer Mennonitisches Lehrerseminar. Teachers at this time were P. J. Braun, Peter Epp, Aaron Toews, P. P. Sawatzky, B. B. Wiens, and Abraham Klassen. Its director, P. J. Braun, reported in 1922 that 400 teachers had been graduated during the period of 44 years (since 1878) and that they were serving in most of the Mennonite settlements of European and Asiatic Russia. Many of them were ordained to the ministry or were leaders in the economic and cultural life of the Mennonites. After the Revolution the school fought a losing battle with the Communist government and philosophy. Gradually most of the teachers were forced to resign; many left for America, others were exiled, and a few managed to find other occupations. The Halbstadt Mennonite Zentralschule and the Teachers' Training Institute did much to raise the spiritual, cultural, and economic level of the Mennonites of Russia. (See also Education Among the Mennonites in Russia and Zentralschule.)