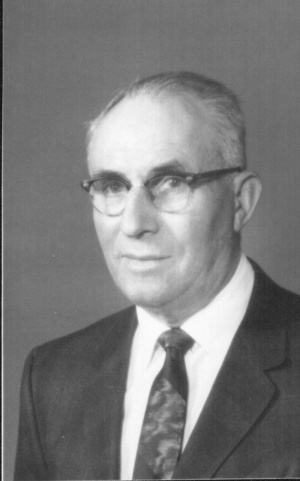 Jacob Bernhard Harder: minister and choir director; born 27 September 1900 to Bernhard and Anna (Janzen) Harder in Friedensfeld, Zagradovka Colony, Russia. He was the oldest in a family of six children. During his ninth year the family moved to Chortitza in Siberia where he was baptized and accepted into the Chortitza Mennonite Brethren (MB) Church, 8 June 1923. Shortly thereafter the family relocated to Slavgorod where he met and married Kaethe Klassen, 8 August 1926. Two sons were born to them there. With Harder being the secretary for Mennonite Central Committee in the area, his name appeared on the "blacklist." Searching for safety, the Harders left with their family for Moscow and on 16 June 1929 immigrated to Canada, settling in Sardis (Greendale), British Columbia. Here one son and two daughters were added to the family. Jacob died 2 January 1975.

Jacob B. Harder loved music and was also committed to serving the Lord in the teaching and preaching ministry. While still in Chortitza, he succeeded his father as director of the church choir and later served in that same position in the Slavgorod MB Church. Jacob and Kaethe were charter members of the Sardis (Greendale) Mennonite Brethren Church, organized 11 January 1931. That same year Harder gathered a group of about twenty voices to form the first church choir with only a tuning fork (Stimgabel) to assist him. Music notation was written on four parallel lines, one for each voice, SATB, using numbers (Ziffern) to indicate their level on the musical scale (Tonleiter). Harder spent many evenings, by the light of a kerosene lamp, copying songs with special ink and duplicating them on a gel pad. During the winter months the choir leaders of the Sardis, Yarrow and East Chilliwack MB churches practiced songs with their respective choirs, singing them as a mass choir at songfests (Saengerfeste) shortly before or on Easter Sunday. To accommodate the large number of people, the Achelitz Hall in Sardis was rented for such occasions.

Jacob B. Harder served as lay minister in the Greendale MB Church (1931-1974), also assuming the duties of an unsalaried interim pastor for several years and as assistant pastor for about the first twenty years of the church. He lead the church choir, 1931-1963, and the German choir, 1967-1974. In addition to the duties in his home church, he taught in the Elim Bible School, Yarrow, BC during the 1949-1950 school year, and served the British Columbia Conference of Mennonite Brethren churches as secretary at its founding convention in 1931 and in 1933-36. His dedicated work and devotion to the Lord were appreciated by many. Jacob B. Harder was known to "say much in few words."