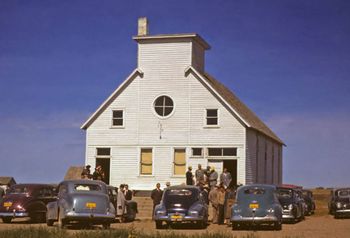 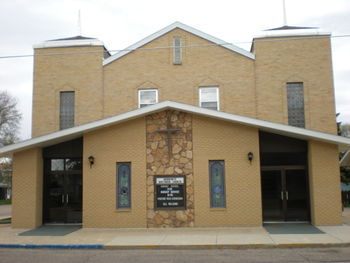 Harvey Mennonite Brethren Church, located 11 miles southwest of Harvey, North Dakota, was started by settlers from the Wittenburg, South Dakota area, near Menno and Parkston, in 1895 and 1896. They homesteaded mostly in a small enclave some 13 miles southwest of Harvey, straddling the Wells County/Sheridan County line. The earliest homes were made of sod or stone, and later when the trains ran bringing lumber and other products, they built wood frame structures. In 1898, with the baptism of its early members in a pasture belonging to Friedrich Faul on the Sheyenne River, the church was formally born as a daughter church of the one in Wittenburg, South Dakota.

Worship services were held in the homes of the church members for a period until George Bechtold built a new stone house and donated his three room sod house to be used for worship services. The names of the earliest church members included Reimche, Faul, Seibel, Kroeker, Ollenberger, Bechtold, Baumbach, Unruh and Beier. Pioneer families tended to be large in number and with new converts the 3 rooms were soon stressed and they began to plan for a larger structure. In January 1900, a new building was dedicated for worship services. Constructed of wood, it measured 20' x 32' x 10' and cost $600 to complete. The costs were paid for by the time the church was dedicated.

The congregation continued to grow and by 1916 had outgrown this new church, and plans were begun to build a larger structure near the old church. Completed in 1917-1918, this new church measured 30' x 50' x 14' with a "good basement." The old church was used as a Sunday school for a time. The cost of the new church building was $6,000, and it too was paid for by the congregation close to the time of the dedication.

Like all pioneering families of all faiths, they experienced extreme hardships over the early years. Epidemics like diphtheria, measles, various fevers, and worst of all, Spanish Flu ravaged these families. Over the ensuing years of the Great Depression, many members of the church contracted "California Fever" and sold their farms to make the move to what they'd hoped was their new promised land. The church also grew, attracting new members who lived closer to Harvey. A number of members retired from farming and had moved to town also, and discussions began to build a City Church to minister to the needs of those who lived farther away. On 25 June 1950 a ground breaking ceremony was held for this new church in Harvey. Worship services began in the new church beginning in January 1951 and until 1975 both country and city churches ministered to the needs of their congregations.

Due to declining membership and the costs associated with keeping the country church open, it was decided to merge the two into one congregation utilizing only the city church for services. On Sunday, 17 August 1975, the last service was held at the country church, marking an end to a long history in that area. In later years, the old church was demolished but the parsonage still stands. Across the road, the cemetery is well tended and is still in use today.

At the beginning of 2016 it was announced that Harvey Mennonite Brethren Church and Bethel Baptist Church of Harvey were merging to form a new church called Cornerstone Community Church. Beginning 6 March 2016, the new Cornerstone Community Church congregation would be served by Abel Threeton, with services alternating between the sanctuaries of the Mennonite Brethren and Bethel Baptist Churches.

US Conference of Mennonite Brethren Churches