From GAMEO
Revision as of 08:33, 21 December 2016 by RichardThiessen (talk | contribs) (Added hyperlink.)
(diff) ← Older revision | Latest revision (diff) | Newer revision → (diff)
Jump to navigation Jump to search
A checked version of this page, approved on 21 December 2016, was based on this revision. 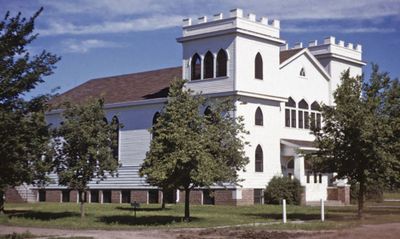 The Henderson Mennonite Brethren Church began in 1876 when seven Mennonite Brethren families settled in York and Hamilton counties, Nebraska. The church was organized the next year with 30 charter members. Peter Regier and Heinrich Nickel were their leaders and became ministers. John J. Regier was the first elder. By 1880 the church membership was 120, and by 1888 it had increased to 226. In 1887 a church 40 x 80 ft. was built three miles (five km) northwest of Henderson, which was replaced in 1926 by a church in town. In the early years the church endured severe testings through strange teaching on divine healing, sanctification, and Seventh-Day Adventism, but weathered them through the wise counsel and guidance of Elder Regier.

In 1902 the church elected John J. Kliewer as presiding minister and leader and two years later as elder, serving until 1924. He was followed by the ministers Gerhard Wiens and John Abrahams. Other ministers who have served the church as pastors to the 1950s were David Hooge, B. B. Fadenrecht, H. B. Kliewer, H. E. Wiens, Art Flaming, and Henry R. Baerg (1953-1956). The membership in 1954 was 275.

A number of missionaries and other Christian workers have come from this congregation. Among these should be mentioned the evangelist J. S. Regier, and the foreign missionaries, Franz and Agnes Wiens, Mr. and Mrs. B. F. Wiens, Mrs. J. S. Dick, Miss Tina Kornelsen, Elizabeth (Mrs. P. V.) Balzer, and Mrs. J. J. Kasper.