From GAMEO
Revision as of 00:02, 11 March 2019 by AlfRedekopp (talk | contribs) (→‎Bibliography)
(diff) ← Older revision | Latest revision (diff) | Newer revision → (diff)
Jump to navigation Jump to search
A checked version of this page, approved on 11 March 2019, was based on this revision. 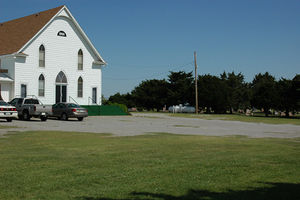 The Mennonites that formed the Herold Mennonite Church had all come from many different parts of Imperial Russia, beginning in the 1870s, and all pioneered in the US Midwest or central plains. In the early 1890s, with the opening of Indian Territory for settlement in what is now Oklahoma, most took out homesteads in west central Oklahoma in an area bounded loosely by the frontier communities of Cordell, Bessie, and Korn (now Corn). The early pioneering years were challenging but the red soil of Oklahoma was productive and the families thrived.

At first Mennonites of many diverse backgrounds met for worship in homes. In 1896 they formed the Sichar Mennoniten Gemeinde with Michael Klaassen as pastor. Families then worshiped in the local schoolhouse and in 1897 a church building was constructed on the farm of Jacob and Helena Jantzen. Differences between members were so difficult to resolve that the congregation divided, with the larger group reorganizing on 14 September 1899 with 46 members as the Herold Mennonite Church with Michael Klaassen as pastor. The other group which retained the name Sichar sold their interest in the building to the newly established Herold congregation and Sichar built themselves a new structure 2.5 miles (4 km) directly south. Elders Christian Krehbiel, Peter Balzer, and Jacob Toews assisted the Herold congregation in the early years.

On 14 April 1905, Jacob and Helene Jantzen formally deeded 3 acres (1.2 ha.) of farmland to the Trustees of the Herold Mennonite Church for its building and cemetery. The church was named for a post office approximately 3 miles (4.8 km.) north-west of the church, and the name resonated with the congregation, for they should be a Herold of the gospel of our Lord, Jesus Christ. In 1915 a new building was constructed adjacent to the original structure. In these early decades Jacob Jantzen and Peter Quiring were also ordained as pastors. In 1914 the congregation's membership was 132 with a total of 308 souls in the church community.

The entry of the USA into the First World War in 1917, and the adoption of universal conscription, resulted in stress and disunity in the congregation. Unfortunately the war caught many Mennonites unprepared, with some members having little understanding of their historic peace theology. While a few members accommodated the war measures, others led by Ältester Klaassen strongly advocated for peace, nonresistance, and nonconformity. Several young men of the congregation were convicted for failing to enlist and were sentenced to prison terms of 25 years. The men served their sentence in Leavenworth, Kansas, and it was there that Ältester Klaassen's son Johannes died of Spanish Influenza in 1918. This tragedy of conscription forced 19 families, about half the congregation, to flee to Canada. After the end of the war some returned but the congregation made serious efforts to rebuild.

After the 2012 Western District Conference annual meeting, Herold Mennonite Church left the conference, believing that conference leaders and delegates had departed from biblical authority and failed to follow the denomination’s Confession of Faith and Membership Guide­lines. In June 2013 the congregation joined the South Central Mennonite Conference.