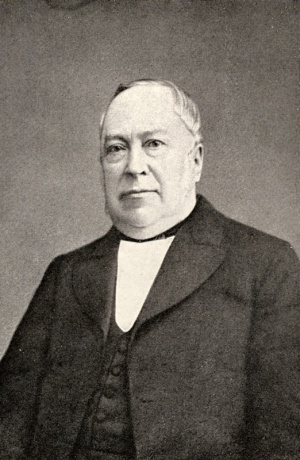 Jacob Gijsbert de Hoop Scheffer was born 28 September 1819 at the Hague and died 31 December 1894 at Amsterdam. His parents were not Mennonites, though his grandmother was Aagje Houttuyn (of Hoorn) of the well-known Mennonite Houttuyn family. From his fourth year, after his father had died, he was educated by a relative, Jacob de Hoop, whose family name was added to that of young Jacob Gijsbert, his father only bearing the name Johannes Scheffer. He studied theology at the universities of Leiden and Utrecht and the Mennonite Seminary at Amsterdam. In 1843 he was appointed ministerial candidate and soon answered a call of the Mennonite congregation of Hoorn to be its minister. He served at Hoorn 1843-1846, Groningen 1846-1849, and Amsterdam 1849-1860. In this year he became a professor of the Amsterdam Mennonite Seminary, teaching exegesis of the Old and New Testaments, Mennonite history and homiletics. In 1877, when the Athenaeum (Latin School) of Amsterdam became a university, de Hoop Scheffer was also appointed professor of this university and called to teach church history. He resigned in 1890.

In his youth de Hoop Scheffer was much interested in Dutch medieval literature and published a number of literary papers. In 1860 he took up his professorship with an address in Latin: De providentia divina Teleiobaptistas Neerlandicos ab exitio vindicante (The Divine Providence Protecting the Dutch Mennonites from Extinction), a revised translation of which was published in Dutch in 1861: De Doopsgezinde broederschap in Nederland voor vervloeiing en ondergang bewaard. His most important publication was a book published at Amsterdam in 1873, Geschiedenis der Kerkhervorming in Nederland van Haar ontstaan tot 1531, of which a German translation (by P. Gerlach) appeared in 1886: Geschichte der Reformation in den Niederlanden von ihrem Beginn bis zum Jahre 1531. De Hoop Scheffer's paper of 1881 on the Brownists at Amsterdam: De Brownisten te Amsterdam gedurende de eerste tijd na hunne vestiging, in verband met het ontstaan van de Broederschap der Baptisten, is still of outstanding significance. This study, edited by W. E. Griffis, appeared in 1922 at Ithaca, New York, under the title History of the Free Churches, called the Brownists, Pilgrim Fathers and Baptists in the Dutch Republic 1581-1701. But the most important field of de Hoop Scheffer's study was the history of the Mennonites, especially of the early period of Dutch Anabaptism and Mennonitism, on which he published a large number of papers in the Doopsgezinde Bijdragen; the most extensive of these papers is the study on "'t Verbond der vier Steden" in Doopsgezinde Bijdragen 1893.

In 1870-1893 he was editor of the Doopsgezinde Bijdragen. In 1852-1894 he was a member of the board of the Algemene Doopsgezinde Sociëteit (A.D.S). He was a member of a number of learned associations, such as the Society of Dutch Literature and the Royal Dutch Academy of Science. His learning was recognized by the University of Leiden, which honored him with the degree of Doctor Theologiae honoris causa in 1870.