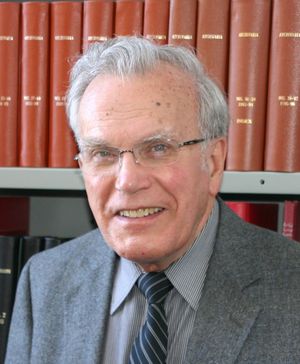 Helmut was born in Bassano, Alberta, Canada to immigrant parents and grew up in nearby Gem. He was the eldest of three brothers in the family. His father was a minister and Bible college instructor whose work and studies took the family to many different parts of Canada and the United States. Finally, the family moved to Winnipeg, Manitoba, Canada, where Helmut completed his high school education at the Mennonite Brethren Collegiate Institute.

Following his high school graduation, Helmut began classes at United College (the University of Winnipeg). After finishing his undergraduate studies, he went on to medical school and chose to specialize in orthopedics. In 1957 Helmut married Dorothy Rempel in Winnipeg. Their first daughter, Karen, was born in 1960.

Further studies took Huebert and his small family to Oswestry, England, for a year. Later, when son David (born 1964) was still very young, the family spent some time in California before returning to Winnipeg. The last member of the family, Susan, was born there in 1967.

Medical work took Helmut and sometimes his family to many parts of the world, including Zaire (now Democratic Republic of Congo), Bangladesh, and Paraguay. Travel for historical interest and relaxation also took the family to the Rocky Mountains in western Canada, various parts of Europe, China, and other parts of the world.

Meanwhile, Helmut also pursued a long-term interest in researching various aspects of Mennonite history. He eventually published ten books, including the Mennonite Historical Atlas, which he wrote together with mapmaker William Schroeder, as well as biographical works and other books on Mennonite subjects.

Participation in church was always very important to Huebert. He was active in the Portage Avenue Church (Mennonite Brethren), where he served as moderator for several years, in addition to working on various committees. He sang on the worship team and in choirs, taught Sunday School, and sang in special performances with the Mennonite Festival Chorus on several occasions.

In June 2005, Helmut retired from active work, although he continued as a consultant until the day of his death. In 2012, he experienced a heart attack while visiting the family cottage, and he began to have a series of increasingly frequent health episodes. On 21 November 2016, after a morning at work, he suffered a severe stroke and died that afternoon. The memorial service was at the Portage Avenue Church on 25 November.

Helmut Theodore Huebert was a dedicated doctor, amateur historian, and church worker who was well known for his contributions in these and other areas. Through his commitment to his work and other interests, he was an example for others to follow.

Huebert, Helmut. The Life of Katharina Johanna Huebert: By the Grace of God from the Cradle to the Grave. Winnipeg: Helmut Huebert, 2003.

Crimea: the Story of Crimea and the Mennonites Who Lived There. Winnipeg: Springfield Publishers, 2013.

Events and People: Events in Russian Mennonite History and the People that Made Them Happen. Winnipeg: Springfield Publishers, 1999.

Katharina Johanna Huebert: By the Grace of God from the Cradle to the Grave. Winnipeg: Helmut Huebert, 2003.

Mennonites in the Cities of Imperial Russia, V. 1 and 2 Winnipeg: Springfield Publishers, 2006-2008.