From GAMEO
Revision as of 01:58, 9 July 2018 by AlfRedekopp (talk | contribs)
(diff) ← Older revision | Latest revision (diff) | Newer revision → (diff)
Jump to navigation Jump to search
A checked version of this page, approved on 9 July 2018, was based on this revision. 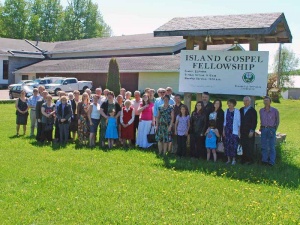 Island Gospel Fellowship traces its beginning to 1940, when 25 Old Colony and Sommerfelder Mennonite families in search of land moved into Burns Lake, British Columbia, from the Swift Current and Saskatoon areas of Saskatchewan. In 1958 Henry Toews of Steinbach, Manitoba, a missionary candidate for Paraguay, came to Burns Lake for a program of evangelism. Many people made spiritual commitments. Further meetings were held in early 1959 with the help of John Knelsen and David Froese of Swift Current. On 22 February 1959, 22 members were received into the Evangelical Mennonite Conference.

More evangelistic meetings followed in May and October 1959 with Rev. Ben D. Reimer as speaker. In March 1959 plans were made for a church building. A lot was purchased on Gerow Island on the south side of Burns Lake and a building (27.6 X 46.2 metres) with a full basement was constructed in 1959 at a cost of $3,600 (excluding labour). In 1980 it was replaced by a new sanctuary that seated 250, and dedication services were held on 19 January 1981.