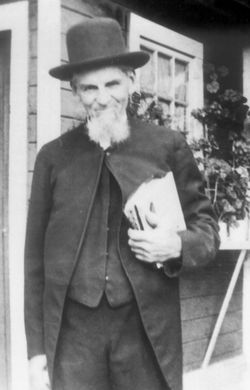 Dan Iutzi grew up in an Amish home in East Zorra Township. His grandparents had migrated from Germany about 1832. Dan married Veronica Roth in 1896, and they had six children. Dan built a new house and barn on his farm near the town of Tavistock and became a good farmer, though he struggled with tension between the demands of his farm and church commitments. Dan cautiously accepted new farming techniques, and was among the first to have battery-operated lights in the barn as well as an automobile.

On 20 April 1902 Dan was chosen deacon, on 22 October 1914 as minister, and on 14 November 1917 as a bishop, each time with the use of the lot. There was a pattern of progression on the "Bench." For the ordination of deacons, nominations were taken from the brotherhood and usually the lot was used for the final selection. The deacons were often promoted to the position of minister by the consent of the congregation. The bishop was chosen by lot from the ministers. This method provided on-the-job training and allowed men to gain experience as deacons before being ordained as ministers.

Bishop Dan Iutzi and Minister Jacob R. Bender were the effective leadership team of the East Zorra Amish Mennonite Churches and the Ontario Amish Mennonite Conference (OAMC) for more than 30 years, because they complemented each other.

Both Iutzi and Bender were ordained as ministers in 1914 and were in the lot together when Iutzi was chosen as bishop. Bender was the visionary, theologian and teacher. Iutzi's cautious leadership enabled the acceptance of new innovations: the Ontario Amish Mennonite Conference structure, Bible Conferences, Young People's Bible Meetings, Winter Bible School, and Summer Bible School, without splitting the congregation.

During his leadership, the East Zorra Church grew and expanded to worship in three meeting houses: East Zorra (16th Line) 1837, Cassel (17th Line) started in 1935, and Tavistock in 1942. The ministers rotated to the three places of worship and Bishop Iutzi performed 817 baptisms, 259 marriages and many funerals during his 31 years as bishop. Dan always preached in German, but the younger ministers were preaching in English before Dan retired in 1948.

Dan Iutzi served as the first moderator of the Ontario Amish Mennonite Conference, in 1924-1936, and assistant moderator 1938-1947. Conference was made up of all the ordained men from the congregations in East Zorra, Wilmot, Wellesley, Mornington, and Hay Townships. Dan took an active role in setting agendas for conference and was especially valued as a mediator in conference affairs. Sometimes there were disagreements in how to maintain a pure church (discipline) and what new innovations to accept. Iutzi was a good listener. If asked for his opinion, Dan would often say that he wished to pray about it, rather than give an unconsidered response.

Dan's personality and emotional makeup were appealing to all groups, and people could identify with him. Dan was not really a theological man, or overly conservative in matters of lifestyle, though he was not ready to accept change indiscriminately. This helped him serve as church statesman and mediator.