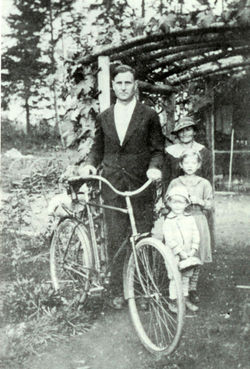 Aron Jantzen was born and educated in Russia and immigrated with his parents to Mexico in 1924, where he married Tina. They and his parents moved to Winnipeg, Manitoba in 1926 and relocated to Moosomin, Saskatchewan before their move to Yarrow, BC in 1928. In 1934 the Jantzens along with seven other families purchased land in the Coghlan area of Langley, BC.

Jantzen was ordained to the ministry on 28 July 1935 by N. W. Bahnmann. He along with H. H. Dueck and Jacob J. Baerg provided leadership in the Coghlan Mennonite Church (later Bethel Mennonite Church), which included serving as choir director and as Sunday school teacher. When Bahnmann started the Coghlan Bible School, Jantzen served as one of the instructors in 1939-40. In terms of the larger provincial conference, Jantzen served on several occasions as the vice-chair of the conference in 1946, 1947 and 1951 and as the secretary for the Conference of Ministers from 1937 to 1944 and again in 1947 and 1948.

Jantzen's ministry extended beyond the Coghlan/Aldergrove area to the Mennonites in Abbotsford. He often pedaled his bicycle to Abbotsford on Sunday morning regardless of the weather conditions, and it was not unusual for him to ride a bicycle all the way to Vancouver, Sardis or Yarrow on Sunday mornings.

Jantzen retired towards the end of the 1960s.