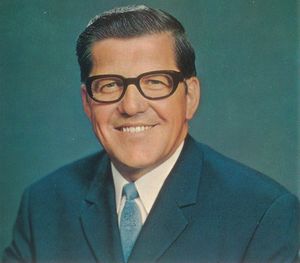 Hildor grew up on a farm in southern Saskatchewan. From a very young age Hildor had a passion for music. At an early age he won a singing contest to sing on the radio. He had a second passion, that of serving God, and being an influence to others in bringing them into a relationship with God.

After marrying Olga Penner, Hildor and Olga attended Prairie Bible Institute and worked with the music team. Hildor, together with his brothers Leo and Adolph, and Adolph’s brother-in-law Cornelius Enns, formed the Janz Quartet in 1946. In 1951 the German branch of the mission organization Youth for Christ invited the Janz Quartet to minister as part of a nationwide crusade for three months.

In 1954 Hildor moved to Los Angeles, California, where he studied voice under the direction of some of the best singers in the world.

Upon the completion of his studies, Hildor and his brother Leo joined together to form the Janz Brothers Gospel Association, later known as the Janz Team and today known as TeachBeyond. They moved to Europe, with Leo preaching and Hildor ministering through music and evangelism. Their first radio broadcast over Radio Luxembourg took place in 1955.

The Janz Team held numerous crusades throughout Europe. Hildor’s warm tenor voice became the hallmark of the Janz Team. Their record label, Songs of Life Records, produced singles that were popular throughout the German-speaking world as well as in Canada, the USA, and South America. Beginning in 1965, the Janz Team made several evangelism trips to Brazil, Paraguay, and Argentina. The ministry also established what eventually became known as the Black Forest Academy in 1956

After decades of work in Germany, Hildor moved back to Canada and lived there until his death in Abbotsford, British Columbia.

Hildor touched the hearts of thousands of people. People were attracted to Hildor not only because of his incredible voice but also because they sensed his love for people. He is considered one of the most popular gospel singers worldwide, and through his recordings and radio programs his voice was heard around the world.